Under the deal, Washington finally agreed to meet Poland's demand to equip its army with a battery of Patriot missiles as defence against a short-range attack Warsaw fears. 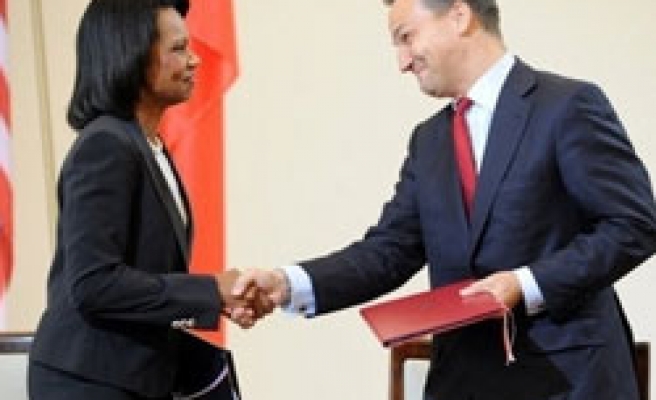 The United States and Poland signed a deal on Wednesday to station elements of a U.S. missile defence shield on Polish soil, a move certain to aggravate Russia-Western tensions over Moscow's intervention in Georgia.

The site in Poland hosting 10 interceptor rockets and a giant radar in neighbouring Czech Republic will form the European part of a global system Washington says it is assembling to shoot down ballistic missiles it fears could be launched by "rogue" states or militant groups such as al-Qaeda.

"This is an agreement that will establish a missile defence site here in Poland that will help us to deal with the new threats of the 21st century, of long range missiles ... from countries like Iran or North Korea," Rice told reporters.

Russia sees the prospect of placing the shield in parts of central Europe that it used to control as a threat to its security.

It says Washington and Warsaw rushed into finalising the deal as a response to its military action in Georgia. Warsaw and Washington repeatedly denied this although Tusk at some stage said the events in Georgia showed Poland's concerns over its security need to be taken seriously by its U.S. ally.

Poland, the biggest ex-Soviet satellite in central Europe, as well as the Baltic nations that were Soviet republics until 1991, have condemned Russia's strike against Tbilisi.

Across the region, newspapers, commentators and politicians drew parallels between Moscow's operations in Georgia to Soviet interventions in Hungary and Czechoslovakia in 1956 and 1968 to crush their attempts to leave Moscow's orbit.

Following the events in Georgia, surveys showed a turnaround of Polish public opinion in favour of the shield, accompanied by a sharp rise in apprehension of Russia.

Some Russian politicians and generals have said Poland must be prepared for a preventive attack on the site in the future -- a threat that Washington has dismissed as empty rhetoric.

NATO endorsed the U.S. missile defence plan for Europe at its summit in Bucharest in April even though some European allies are sceptical about its effectiveness and concerned it could lead to a new arms race.

The missile shield deal will now need to be approved by the Polish parliament, which is seen as a formality because the government as well as the main opposition party support it.

Tusk's government bargained hard over the terms of the deal since coming to power last November, demanding greater military cooperation with the United States for hosting the site.

The negotiations seemed stuck in July but a compromise was reached just as Russia intervened in South Ossetia.

Under the deal, Washington finally agreed to meet Poland's demand to equip its army with a battery of Patriot missiles as defence against a short-range attack Warsaw fears.

"The presence of the Patriot battery which will defend our territory and the U.S. installation is a practical dimension of this watershed agreement," Tusk said.

Rice said Poland's role as the strategic U.S. partner in NATO would get a boost from the deal.

"This is a very special day," Rice said. "For Poland and the United States this is just one more example of the deepening of our relations over the last 20 years."