The figures were released as police continued to search for the killers of 16-year-old Ben Kinsella, stabbed to death in Islington, north London, on Sunday. 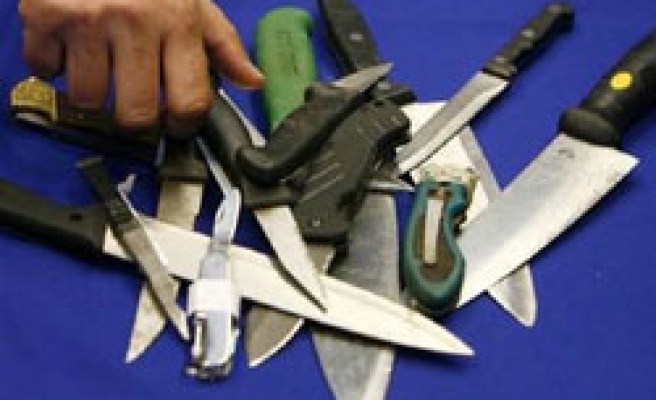 Police have arrested 1,214 people in London during a six-week crackdown on knife crime, Scotland Yard said on Wednesday.

Officers found 528 knives after conducting nearly 27,000 searches during Operation Blunt 2, launched after Boris Johnson was elected London Mayor in May pledging to tackle knife crime in the capital.

Metropolitan Police Commissioner Ian Blair announced the figures alongside Johnson at a briefing at the Mayor's offices in City Hall.

The figures were released as police continued to search for the killers of 16-year-old Ben Kinsella, stabbed to death in Islington, north London, on Sunday.

Kinsella was the 17th teenager murdered in the capital this year. Six teenagers have been arrested over his death and three remain in custody.

On Tuesday night, a woman in her late 20s became London's latest stabbing victim, following the knife murder of a 34-year-old man on Monday.

"The dreadful murder of Ben Kinsella shows that the problem of knife crime is still with us," said Blair.

"I know the communities of London understand that this is something they and the police have to solve together and I promise that the Met is in this for the long haul and will do everything in its power to stop these murders continuing."

On Tuesday, hundreds of people, many wearing T-shirts emblazoned with pictures of Kinsella and holding placards, took part in a protest led by the victim's family and friends through north London to the place where he was stabbed.

"Everybody is shocked by the level of violence we are seeing, particularly towards young people in London and we must all work as hard as we can together to reverse this dreadful trend," said Johnson.