Turkish police arrested nearly 600 people and used water cannon and tear gas to break up a left-wing May Day rally in central Istanbul on Tuesday, officials and organisers said. 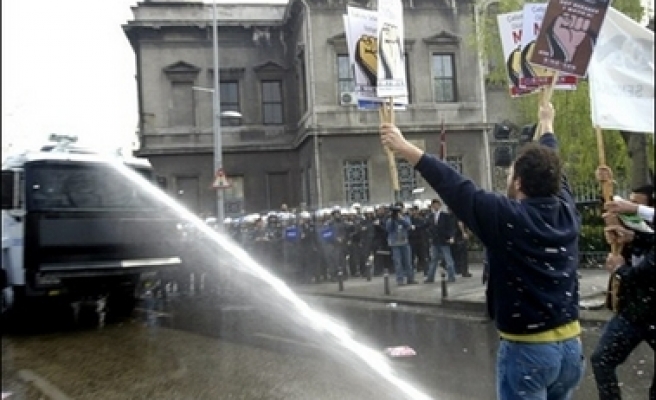 Turkish police arrested nearly 600 people and used water cannon and tear gas to break up a left-wing May Day rally in central Istanbul on Tuesday, officials and organisers said.

At least one person was badly hurt, the DISK labour confederation said.

Public transport was paralysed in the sprawling city of more than 12 million as the authorities blocked roads, cancelled ferry services and closed metro stations in a bid to cope with two crowds of demonstrators on either side of the Bosphorus.

Police were trying to prevent union groups marching to Taksim Square to mark the 30th anniversary there of "Bloody May Day" -- when 34 people died after unknown gunmen fired on a peaceful crowd triggering mass panic.
The Istanbul authorities had banned marchers from the square, citing intelligence reports that troublemakers were intent on violent confrontation with police.

After violent clashes in one section of the city, near the Inonu Stadium, tensions calmed after police and unions struck a deal allowing a small group of demonstrators access to Taksim Square where they held a brief ceremony.

But violence then erupted in a nearby area, the popular Okmeydani district, where about 1,000 youths armed with sticks, stones and slingshots began marching on police lines blocking their access to the square.

"More than 580 people have been detained," Istanbul Governor Muammer Guler said on the NTV news channel, including members of "illegal organisations." He did not elaborate.

He said police had seized "molotov cocktails, firearms, ball bearings" used as ammunition for slingshots and other weapaons.

Earlier, near the Inonu Stadium, police had used water cannon and tear gas to disperse a crowd chanting "Long live May Day" and "Shoulder to shoulder against fascism".

"We do not deserve this -- Turkey does not deserve this. You are giving a shameful image of Turkey -- that of the military coups of 1971 and 1980," health workers' union leader Dogan Halis said in a brief speech that ended when officers bundled him into a police vehicle.

"We have not seen such repression since the days of martial law," Celebi said. "We wanted this to be a peaceful demonstration, but they (the police) prevented it."

DISK said in a statement that six union leaders, including their secretary-general Musa Cam, were among those arrested.

Busloads of demonstrators coming from Ankara and prevented from crossing the Bosphorus bridge to join the rally on the European side, were gathering in an area know as the Mustafa Kemal neighborhood in Umraniye, on the Asian saide, police sources said.

Other buses were stopped at toll booths at the Istanbul end of the motorway from Ankara, and DISK said police were forcing many of them back to the capital.

DISK accused police of throwing tear gas canisters inside some of the buses and said one woman demonstrator was hospitalised with a broken arm and head injuries.

Another May Day rally in Istanbul, held in Kadikoy Square on the Asian side of the city and organised by the moderate TURK-IS labour confederation, went ahead without incident.

About 17,000 police have been deployed in Istanbul to cope with the demonstrations, officials said.