Police said the presence of 100-odd women in the eastern Bosnian village posed a security risk because local Serbs did not want them there. 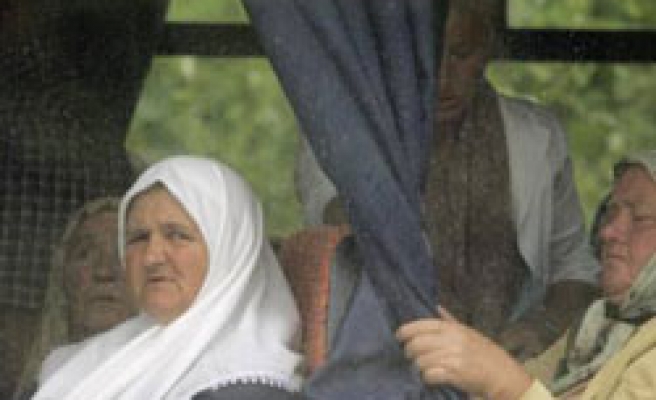 Bosnian Serb police on Tuesday stopped relatives of victims of the 1995 Srebrenica massacre from visiting a site where more than 1,000 Bosnian Muslim men were shot by Bosnian Serb troops.

Police said the presence of 100-odd women in the eastern Bosnian village of Kravice posed a security risk because local Serbs did not want them there. Bosnian Serb Prime Minister Milorad Dodik said the gathering was a "direct provocation".

The women -- mothers, sisters, wives and daughters of the victims -- had wanted to lay flowers outside a warehouse where their relatives were executed on July 13, 1995, in the last months of the 1992-95 war.

"They didn't let us pass, they didn't even let us lay flowers," Munira Subasic, head of a Srebrenica women's association, told Reuters by telephone from a bus returning to Sarajevo under police escort.

Srebrenica, a United Nations-designated 'safe haven' during the war, was under siege for almost three years.

When Bosnian Serb forces took over the town they sent the women and children under 12 away on buses, then hunted down and shot all men and teenage boys in a week-long killing spree.

The bodies were first buried in mass graves, then dug out with bulldozers and moved to hide the crime. Victims' remains are scattered in several graves, taking years to identify. "It's like it's 1995 all over again, we are on a bus under Serb escort," Subasic said. "This is such an injustice, so unbelievable. I cannot even cry."

Police were deployed in and around Kravice, stopping locals and journalists from coming near the site.

The Srebrenica massacre weighs heavily on Bosnia, a country divided politically into Serb and Muslim-Croat regions, each with its own version of the history of the conflict.

Relatives of the Srebrenica dead relive the trauma every year at a ceremony on July 11, when all newly-identified remains are buried at near the town. Only 3,200 people have been identified and buried in the 13 years since the massacre.

The ceremony last week was overshadowed by tension: Bosnian Serbs were enraged that the U.N. war crimes tribunal acquitted a Bosnian Muslim wartime commander of crimes against Serbs.

The Hague tribunal has found Bosnian Serb general Radislav Krstic guilty of genocide for Srebrenica, but the masterminds of the massacre, Bosnian Serb political leader Radovan Karadzic and his military chief Ratko Mladic are still at large.

"We won't give up, we'll come again," Subasic said. "Only next time we won't announce our arrival."