Police rescued a woman held hostage for nearly 24 hours by a former Japanese gangster who had shot dead a policeman after wounding his own son, daughter and another officer and holing up in his house. 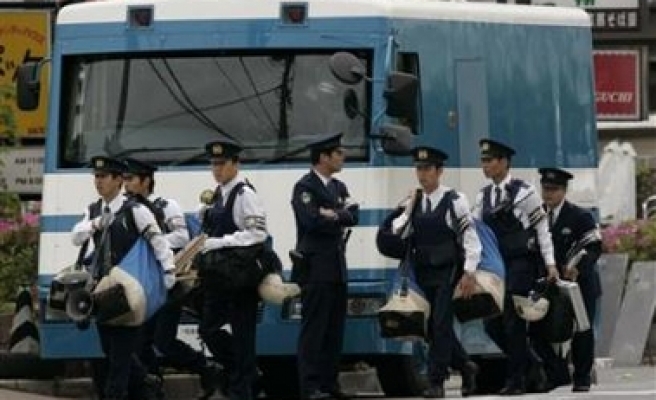 Police rescued a woman held hostage for nearly 24 hours by a former Japanese gangster who had shot dead a policeman after wounding his own son, daughter and another officer and holing up in his house.

Television footage on Friday showed a policeman carrying out the woman, apparently unharmed, while other officers protected them with shields. A police spokesman said the woman came out of the house herself.

The spokesman said she was the ex-wife of the gunman, who was still in the house in Nagakute, a residential suburb of the central city of Nagoya.

In the latest shoot-out to rattle Japan, a policeman who was a member of a special assault unit was fatally shot on Thursday evening while his colleague who had been hit earlier was being rescued.

About 170 officers, including riot police and special units, were mobilized around the gunman's house, and local schools were closed on Friday.

The stand-off comes a month after a gangster shot a fellow mobster in a Tokyo suburb and hid in an apartment before shooting himself, and another gangster shot dead the mayor of Nagasaki, shocking a country where gun control is tough and shootings rare.

"We must push ahead with effective measures to control firearms, including steps against gangsters, so that such an incident won't happen again," Kensei Mizote, cabinet minister in charge of the police force, told reporters.

TV footage earlier showed helmeted police with riot shields rescuing the first policeman, who had been left lying in front of the house for hours because of threats from the gunman, a former member of the Yamaguchi-gumi, Japan's largest crime syndicate.

During that rescue, the gunman shot at police from the house and a bullet fatally hit the special unit officer in the neck, which was not covered by his bullet-proof vest, Mizote said.