Americans now view the war in Iraq more negatively than at any time since the war began, according to the latest New York Times/CBS News poll. 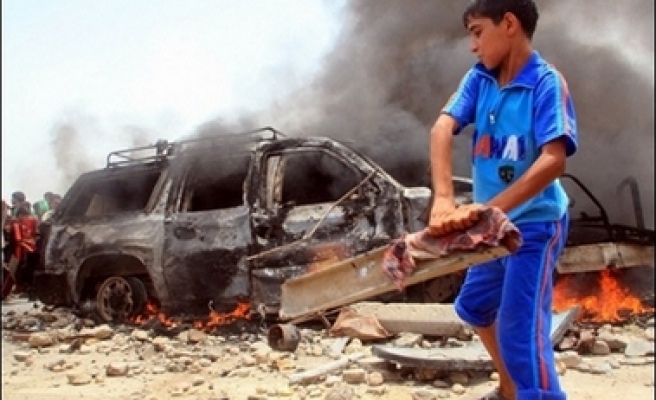 Americans now view the war in Iraq more negatively than at any time since the war began, according to the latest New York Times/CBS News poll.


Still, the majority of Americans support continuing to fund the war as long as the Iraqi government meets specific goals.

President Bush's approval ratings remain near the lowest of his more than six years in office. Thirty percent approve of the job he's doing overall, while 63 percent disapprove.

The majority of those polled disapprove of Bush's handling of the situation in Iraq, foreign policy, immigration, the economy and the campaign against terrorism.

More Americans -- 72 percent -- now say that "generally things in the country are seriously off on the wrong track" than at any time since The Times/CBS News poll began asking the question in 1983. The figure had been in the high 60s earlier this year.

The poll made clear that the war continues to be the issue Americans are most worried about. Sixty-one percent of the poll's respondents now say the U.S. should never have taken military action against Iraq, up from 51 percent in a CBS News poll in April and 58 percent in the same poll in January. Seventy-six percent say things are going badly in the effort to bring stability and order to Iraq, including 47 percent who say they're going very badly.

The nationwide telephone poll was conducted Friday through Wednesday with 1,125 adults. The margin of sampling error is plus or minus 3 percentage points.

A majority of the public, 76 percent, including a majority of Republicans, says the additional troops sent to Iraq this year by Bush have either had no impact or are making things worse in Iraq. Twenty percent think the increase is improving the situation in Iraq.

A majority of Americans continue to support a timetable for withdrawal. Sixty-three percent say the U.S. should set a date for withdrawing troops from Iraq sometime in 2008.

While troops are still there, the overwhelming majority of Americans support continued funding of the war, though most want to do so with conditions. Thirteen percent want Congress to block all funding for the war. The majority, 69 percent, including 62 percent of Republicans, say Congress should allow funding, but on the condition that the U.S. sets benchmarks for progress and the Iraqi government meets those goals. Fifteen percent of all respondents want Congress to allow all funding for the war no matter what.

61 Percentage of Americans surveyed who say the United States should never have taken military action against Iraq.

72 Percentage of Americans surveyed who say that "generally things are seriously off on the wrong track."

76 Percentage who say things are going badly in Iraq.