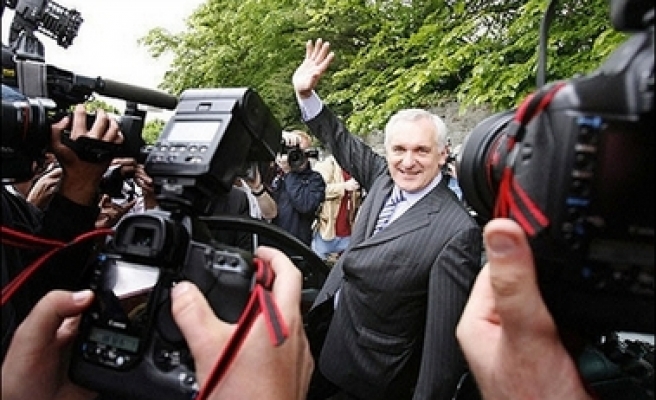 But the poll for national broadcaster RTE also indicated Ireland is likely turn to the left after a decade of center-right government.

The estimated outcome of Thursday's election was released shortly before vote-counting began Friday, with official results not expected before Saturday.

The survey of 3,000 voters measured voter support for Fianna Fail at 41.6 percent. That would be marginally better than the share his center-ground party received in the last elections five years ago.

The poll, which had an error margin of 2.5 percentage points, rated the main opposition Fine Gael at 26.3 percent and its would-be coalition partner, Labour, at 9.9 percent.

However, analysts agreed that Fianna Fail was unlikely to retain all 79 of its existing seats in the 166-member Dail Eireann parliament — and would be more dependent on support from smaller, mostly left-wing parties.

"Bertie Ahern is going to be taoiseach," said analyst Noel Whelan, using Ireland's formal Gaelic title for prime minister. "The question is who's going to be in government with Fianna Fail."

To govern, Ahern's coalition must control half, or 83, seats, which are awarded according to a complex system of proportional representation that allows voters to rank candidates in order of preference.

This means ballots must be counted up to a dozen times as votes are transferred between candidates. The course of these transfers can prove impossible to predict — and this time, analysts say, could favor Fine Gael and Labour candidates. Unlike other parties, those two campaigned in a formal pact and on a common platform, designed to encourage voters to give candidates from both parties their No. 1 and No. 2 votes.