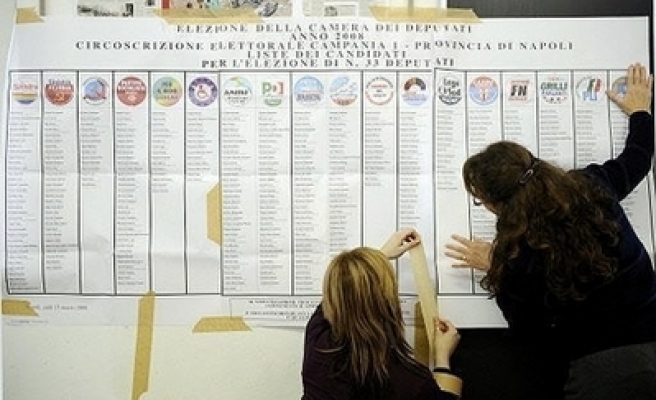 Against a backdrop of a stumbling economy, years of political instability and general malaise, some one-third of the 50-million-strong electorate remained undecided when the last permitted surveys were conducted two weeks ago.

The surveys gave the flamboyant Berlusconi, 71, an edge of six or seven percent going into the vote called after the collapse in January of the government of Romano Prodi.

Berlusconi had enjoyed a double-digit lead over 52-year-old Veltroni as campaigning began in February.

Veltroni, who criss-crossed the country by bus emulating US Republican presidential candidate John McCain's Straight Talk Express, urged voters to "turn the page" on the older generation represented by Berlusconi, who for his part has cast the former Rome mayor as a communist relic.

At 52, the intellectual and compromise-minded Veltroni is already an old hand in Italian politics, which he entered as a communist youth activist in the 1970s, while Berlusconi, now 71, burst into the political arena in 1993.

Whoever wins on Monday will have to contend with a stalling economy, a populace disaffected with the political class and all-too-familiar legislative gridlock.

The fear is that a narrow win -- or even a loss -- for Berlusconi's People of Freedom (PDL) party in the Senate would guarantee the instability that ended the 20-month-old Prodi government.