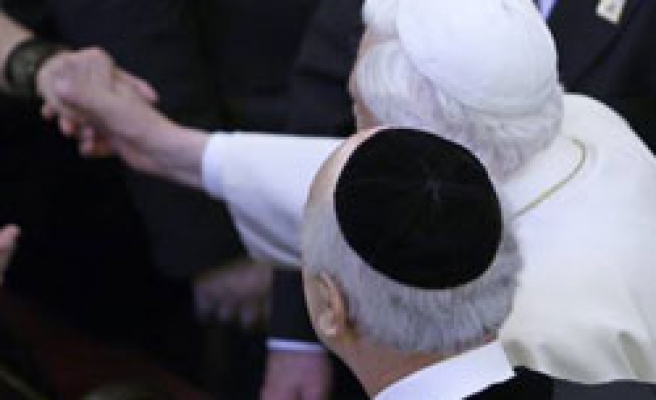 A New York synagogue gave Pope Benedict a warm welcome on Friday, with the chief rabbi hailing his work for inter-faith dialogue and congregants playing down recent tensions between Catholics and Jews.

The visit on the eve of Passover, the holy day marking the exodus from Egypt, was only the third by a pope to a Jewish house of worship. Benedict visited one in Cologne, Germany in 2005, and his predecessor Pope John Paul visited the Rome synagogue in 1986.

"It is with joy that I come here, just a few hours before the celebration of your Pesah, to express my respect and esteem for the Jewish community in New York City," the German-born pontiff said, using the Hebrew word for Passover.

"I encourage all of you to continue building bridges of friendship with all the many different ethnic and religious groups present in your neighborhood."

Catholic-Jewish relations were strained in February when the Vatican published a new prayer for Good Friday services in the old Latin rite that called for the conversion of the Jews. Benedict partly drafted and approved the wording.

Several Jewish leaders criticized the prayer and the Vatican issued a statement that the text "in no way intends to indicate a change in the Catholic Church's regard for the Jews."

Schneier, a Holocaust survivor who came to the United States from Budapest in 1947, made no mention of the controversy and instead stressed their common past in wartime Europe.

"In our lifetime, we have both experienced the ravages of war, the Holocaust, man's inhumanity to man, and tasted the joy of freedom," he said in the synagogue, a New York City landmark built in 1890. "I thank God that both of us have survived."

He added: "Our presence together is a message that inter-religious dialogue is viable and vital to the resolution of conflict. Your message of conciliation has already been heard around the globe."

Catholic-Jewish relations had come a long way since the Second Vatican Council (1962-1965), Schneier said, adding: "Your presence here gives us hope and courage for the road we still have to travel together."

Members of the modern Orthodox congregation played down the recent exchange over the Good Friday prayer.

"He wants this trip to make a point and that point is that the religions should be talking and communicating and not isolating one from the other," said Harvey Feuerstein, 70, a Manhattan lawyer on the synagogue's board or trustees.

Barry Zimmerman, 70, a retired Manhattan chemist, shrugged off the recent disagreements with the remark: "Popes have made worse comments in the past."

Ken Lipper, a Manhattan real estate executive, said after the short ceremony: "He said that he was here to pay his respects to all of the Jews ... I was very impressed."

In the synagogue, two youths gave Benedict unleavened matzo bread and a copy of the Passover Haggadah text. The pope told them he would eat the matzo on Saturday, according to the Jewish ritual.