Pope to get Italian translation of Mevlana's masterpiece

Pope Benedict XVI, cardinals and high-ranking officials from the Vatican and Italy will watch a whirling dervish ceremony (sema) to be performed at the Vatican on June 5 as a part of inter-religious dialogue efforts. 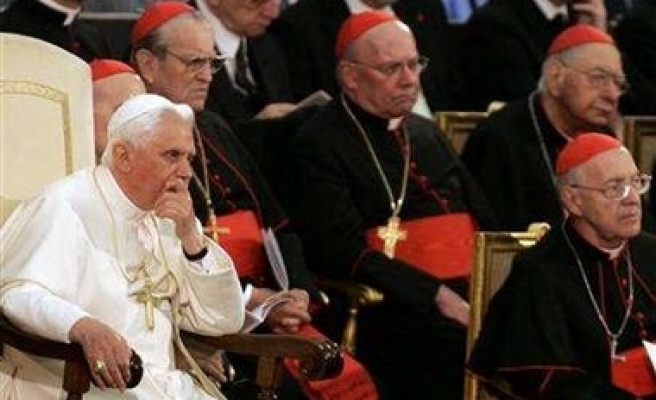 Pope Benedict XVI, cardinals and high-ranking officials from the Vatican and Italy will watch a whirling dervish ceremony (sema) to be performed at the Vatican on June 5 as a part of inter-religious dialogue efforts.

The event has been organized by the Vatican Council of Culture and the Turkish Embassy in Vatican. Ömer Faruk Belviranlı, director of the Konya Turkish Sufi Music Ensemble, said that the events were organized abroad by the Culture and Foreign Ministries on account of UNESCO declaring 2007 the Year of Mevlana, the state-run Anatolia news agency reported. Belviranlı noted that they had given concerts and performed sema ceremonies in Pakistan, Holland and Bosnia-Herzegovina.
“We are expecting the ceremony that will be performed in the Vatican on June 5 will produce a very positive effect. As a part of this event, we will give a copy of the Italian translation of Mevlana’s masterpiece, the ‘Mesnevi,’ to the pope as a present. This tangible step’s significance, particularly at a time when inter-religious dialogue is discussed everywhere, is really large,” he noted. 2007 marks the 800th anniversary of the birth of Sufi saint and poet Mevlana Jelaluddin Rumi.

Undersecretary of Turkey’s Vatican Embassy Deniz Kılıçer said that the ensemble would first give a Sufi music concert and then perform the sema on June 5. He further noted that the concert and sema ceremony -- the latter to be a first in the Vatican -- would take place in the historical Cancellaria Palace, which dates back to the Renaissance era.

“The program within the context of the events being held in honor of Mevlana’s 800th birthday will be held under the patronage of the Ministry of Culture and Tourism and the Foreign Ministry,” Kılıçer said, adding, “The pope, cardinals as well as high-ranking officials from the Vatican and Italy will attend the program. There will also be high-ranking guests from Turkey.” He added that it was important that the event was to be held in a palace that ranked among the most valuable and historical in the Vatican.

Konya Mayor Tahir Akyürek said that they, as the local government of Konya, had held a large number of events abroad, and that the Ministry of Culture and Tourism was also holding a great number of events abroad on account of the Year of Mevlana. He said that at the end of every event they gave the highest-ranking guests translations of the “Mesnevi,” which had so far been translated into Italian, German, French, English and Urdu by the local government of Konya.

“The pope will be presented with the Italian translation of the ‘Mesnevi.’ I believe that he will be affected by the ‘Mesnevi,’ which was addressed to the whole of humanity,” the mayor added.