"We see a lot of child labour. The poverty rate among Palestinians tripled since 1999 and has reached 70 percent. This has an impact on children. They have to go out and be the breadwinners for the family to survive." 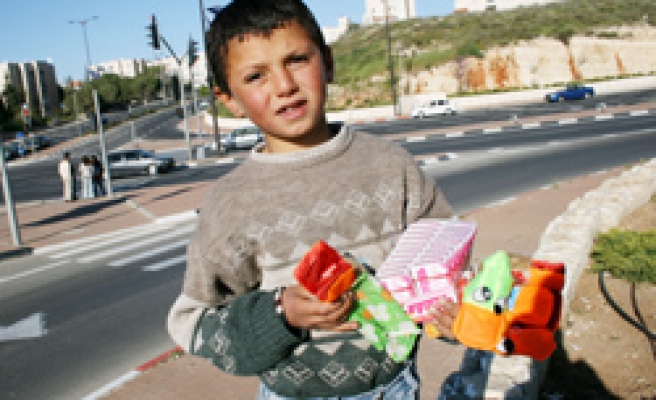 Eight-year-old Younis spends his days dodging traffic at a busy East Jerusalem intersection, peddling soft toys to drivers as a way of making some money for his impoverished family.

"At the end of the day I give all the money to my father. Neither of my parents has work. If they did have work, they would be working, not us. The stuff I sell comes from Ramallah - my father buys it," said the youngster from the Jerusalem suburb of Al Ram, now cut off from the city by slabs of Israel's West Bank barrier.

Younis is among thousands of Palestinian children who miss school and face danger on the streets every day. He and his brothers say they each make about 150 shekels or US$37 a day and are the family's sole earners.

"We see a lot of child labour. The poverty rate among Palestinians tripled since 1999 and has reached 70 percent. This has an impact on children. They have to go out and be the breadwinners for the family to survive," said Monica Awad of the UN Children's Fund (UNICEF).

Surveys by the non-governmental organization (NGO) Defence for Children International Palestine (DCI) and the Palestinian Central Bureau of Statistics (PCBS) found about three-quarters of street children were working because of poverty, while others said they had problems at home, including abuse.

While the majority of children work inside the West Bank and Gaza Strip, many work in areas on the Israeli side of the West Bank barrier, which cuts into the territory of the West Bank. Most work in Jerusalem as well as Arab villages in the north of Israel.

Thousands of adult West Bankers used to earn a living working inside Israel in agriculture or construction - but they are no longer allowed to enter Israel.

Now only their children can tap into the strong Israeli economy. Unlike their parents, they can easily cross the barrier because children under 14 do not need a permit to get through checkpoints.

And they are also missing out on an education. More than half of Palestinian children who work and earn a wage do not attend school, according to the PCBS statistics.

Nine-year-old Ahmed from Hebron, who works until late at night selling cigarette lighters and batteries to Israelis in the prosperous bars and restaurants in West Jerusalem, initially claimed to go to school in the morning.

But he later admitted that he rarely travels back to Hebron at all and sleeps on the streets in Jerusalem. "We can sell more here," he said.

Children on the street may also face harassment or assault while working, DCI found.

"The problem is getting worse. I see it more and more in Jerusalem and in the West Bank it is even worse," said one Palestinian shopkeeper whose East Jerusalem store is frequented by child vendors.

Most of the street children work as vendors or porters in busy towns, although some do hard labour in quarries, DCI said. Many of them come from the West Bank's desperately poor refugee camps.

Refugees are the poorest Palestinians, although they are eligible for UN food handouts as well as free education and health services.

In its report, DCI said poverty among Palestinians must be addressed if children are to avoid a childhood of labour.

But there is little sign of an economic upturn any time soon. In addition to no longer being able to work in Israel, Palestinians are also getting poorer because the international community is boycotting the Palestinian Authority in a bid to force it to recognise Israel.

And Israel's matrix of more than 500 manned checkpoints and roadblocks inside the West Bank makes it all but impossible for Palestinians to travel to find work, NGOs say, while its West Bank barrier cuts many farmers off from their land.

"What we are seeing here is a lost generation of children. Palestinian children are not living normal lives. We need to bring this normality back into their lives by providing fun days and providing basic services," said UNICEF's Awad.