The official, who wanted to remain anonymous, said "the meeting lasted around five hours. 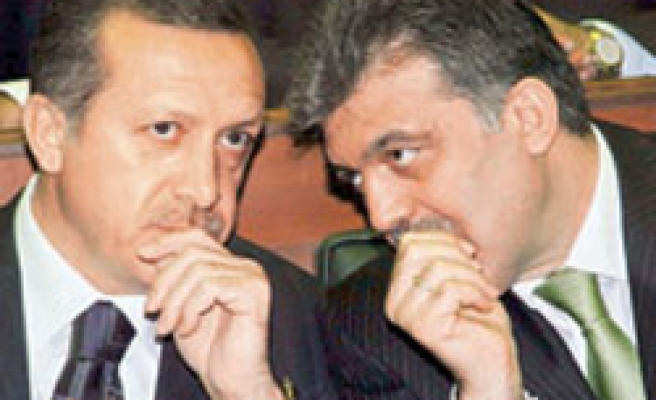 Prime Minister Recep Tayyip Erdoğan and President Abdullah Gül evaluated a closure case against the governing Justice and Development Party (AK Party) and other recent developments in the country in a secret meeting on Sunday evening in the capital, a party official has stated.

The official, who wanted to remain anonymous, told Today's Zaman yesterday that Erdoğan and Gül met at the house of AK Party İzmir deputy Mehmet Tekelioğlu in Ankara on Sunday and evaluated recent developments in the country, including the AK Party closure case. "The meeting lasted around five hours. They [Erdoğan and Gül] exchanged ideas on certain issues related to the ongoing developments in Turkey," stated the official.

The Constitutional Court is currently deliberating on whether to disband the ruling party on grounds that it has become a focal point of "anti-secular activities." The court has not yet reached a verdict.

The official noted that the prime minister and the president had previously convened three other secret meetings in which they discussed developments in the country.

"They met once at the prime minister's official residence and twice outside of official residences. They discussed during Sunday's meeting what consequences a court verdict on the AK Party closure case will have on the country," stated the party official.

Turkey's politicians, the European Union and foreign investors are anxiously awaiting a verdict in the closure case, which has drawn Turkey into a period of political uncertainty, hurting financial markets and slowing its reform process. The closure of the AK Party is expected to push the country into political and economic uncertainty.

Erdoğan and Gül pondered what will happen if the AK Party is closed and if Erdoğan is banned from belonging to a political party.

In the event of such, the government will be dissolved and the remaining AK Party deputies will become independent deputies who may form a new party or join an existing one. Commentators say the most likely scenario would then be early parliamentary elections. Prime Minister Erdoğan would likely regain the office of prime minister as an independent.

The official also said Erdoğan and Gül discussed an approaching meeting of the Supreme Military Council (YAŞ), which is scheduled to begin on Aug. 1, to decide on promotions, retirements and dismissals within the Turkish Armed Forces (TSK).

Another topic discussed at the meeting was, according to the official, a decision by former Deputy Prime Minister Abdüllatif Şener to return to active politics and establish a new political party.

Şener announced his resignation from the AK Party earlier this week after he decided to return to active politics with a new party he is planning to establish. He had opted not to run for a seat in Parliament in the general elections held on July 22, 2007, but to instead lecture at a Turkish university.

Erdoğan and Gül also touched upon a terrorist bomb attack in the heart of İstanbul on Sunday night, which claimed the lives of 18 people and wounded more than 150 others.

The attack was a double-bombing on a busy street in İstanbul's Güngören district. At about 9:45 p.m. a small bomb went off in a telephone booth, apparently designed to lure a crowd, followed by a larger one that went off in a concrete trash bin, designed to cause maximum casualties.

Mehmet Tekelioğlu, the AK Party deputy at whose house Sunday's meeting took place, declined to offer further details on the meeting. "President Gül is the elder brother of my wife. We frequently meet. Prime Minister Erdoğan is the leader of our party. Thus, their visit to our house should be considered normal," he said.