Pro-TurkeySocialist chosen by Sarkozy for FM

Bernard Kouchner, a Socialist and keen supporter of Turkey's accession into the EU, has been made foreign minister in the first Cabinet of President Sarkozy, who is opposed to Turkey's EU accession. 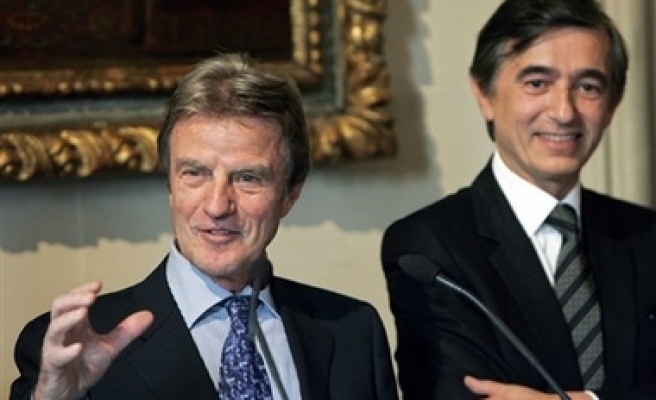 Bernard Kouchner, a Socialist who has been a keen supporter of Turkey's accession into the European Union, has been made foreign minister in the first Cabinet of France's new conservative President Nicolas Sarkozy, who is adamantly opposed to Turkey's EU accession -- unlike Kouchner.

Kouchner, born in 1939, known for his former positions as an outspoken health minister and UN governor of Kosovo, is one of France's most popular figures, largely due to humanitarian work which includes co-founding the Nobel Peace Prize-winning aid group Médecins Sans Frontières (Doctors Without Borders). He has similar convictions to Sarkozy on key issues, such as the plight of Africa, the world's poorest continent, a large swathe of which was once colonized by France. Nevertheless he has been a staunch supporter of Turkey's EU bid, a major difference of view with Sarkozy. Sarkozy's move to appoint a Socialist former minister to the key foreign affairs role in his cabinet has been widely interpreted as a major coup for the new president, who is seeking to broaden the political base of his government.Those who oppose Turkey's EU entry actually consider the EU "a Christian club," Kouchner has argued. In an interview held by Belgian daily Le Soir in 2002 he likened the ruling Justice and development Party (AK Party) to the conservative Christian Democrat political parties of Europe.

"Hands should be extended to Turkey, which is the sole Muslim country who has separated state and religious affairs," Kouchner then said. Blaming those anti-Turkey camps within the EU for putting forth showpiece excuses against Ankara's EU aspirations, he suggested that what they actually aimed at was "an EU design reserved for Christian countries."

Kouchner has already sparked Socialists' reaction by accepting to work with Sarkozy. The appointment of Kouchner is an indicator of "an opening out and transformation" in Sarkozy's well-known policy against Turkey's EU bid, François Géré, head of the French Institute for Strategic Analysis (IFAS), told Today's Zaman.

In the French system, foreign and defense affairs are known to be reserved for policy making by the president. Thus Sarkozy is expected to directly inform foreign policy. Earlier this week Géré, describing Sarkozy as "a pragmatist and realist politician," said, "Sarkozy will assume a manner in compliance with files and France's interests."

Kouchner has been a leading advocate of "humanitarian intervention" -- the right to get involved in another country's affairs if human rights are being abused. He has extended his support for Turkey's EU bid as well, provided it strictly observes its human rights obligations.

He was also one of the rare French politicians who spoke out in favor of a military intervention in Iraq in 2003, saying he was against war but also against Saddam Hussein's regime.