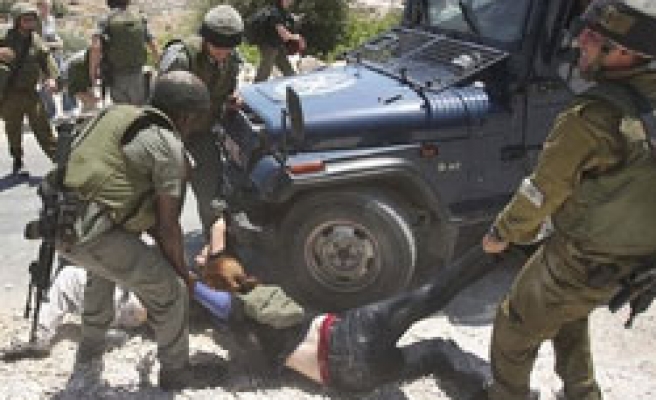 Israeli soliders fired shots Palestinians from a Palestinian town on Sunday as local people marched to protest a proposed extension of its controversial separation barrier.

Israeli troops who have sealed off Nilin, in the occupied West Bank, since Friday imposed curfew.

One resident said up to 50 people were hurt by tear gas and rubber bullets.

The Israeli army said a soldier was wounded and declined to comment on any casualties among civilians on a third day of clashes.

Troops again stopped reporters trying to enter the town of 5,000, 20 km (12 miles) west of Tel Aviv, which has been a focus for protests against the separation walls and fences Israel is building through the West Bank.

A Reuters correspondent on a hill overlooking Nilin saw at least a dozen people walking and shouting through the village. He also heard several shots.

Local people said by telephone they had been prevented from leaving the town since Friday.

An Israeli army spokesman said the indefinite daylight curfew was imposed on townspeople on Sunday, forcing them to stay indoors around the clock.

The West Bank barrier, a network of razor-wire fences and concrete barricades, is cutting off West Bank villages from swathes of farmland.

Four years ago this week, the World Court in the Hague ruled building the 720-km (430-mile) barrier on occupied land was illegal. The United Nations says Israel has ignored that ruling.

Hindi Mesleh, a resident of Nilin who spoke to reporters outside the town, said he had managed to evade the cordon and leave.

He called the curfew "collective punishment" and said food and medical supplies were being kept out of the town. Another resident contacted by telephone inside the town, Mohammad Khawaja, said he had seen some 100 soldiers stopping villagers from leaving their homes. He said about 50 people were wounded by tear gas and rubber bullets during Sunday's clashes.

Construction sites have been flashpoints for confrontations between Israeli soldiers and local Palestinians, who are often supported by protesters from Israel and abroad.

Nilin residents said that during a march against the barrier on Friday around 20 protesters were hurt by rubber bullets fired by Israeli forces. Four people from an Israeli group opposed to the barrier were arrested, one demonstration organiser said.

Casualties and other patients were prevented from leaving the village for treatment, Salah al-Khawaja, spokesman for the Nilin Committee for Resisting the Wall, said on Saturday.