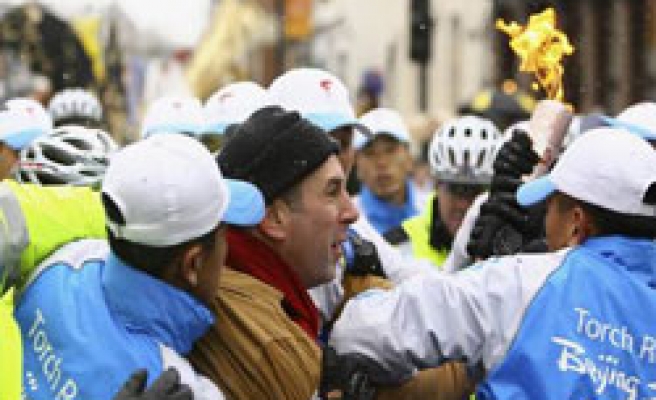 Chinese officials in blue tracksuits and scores of British police on foot and bicycles encircled the celebrities and athletes carrying the flame but demonstrators repeatedly broke through their security cordon.

One man grabbed the torch in west London before police wrestled him to the ground.

Police said 25 people had been arrested four hours into the relay, several of them near Prime Minister Gordon Brown's Downing Street office where about 1,000 protesters gathered.

Brown greeted the torch behind Downing Street's closed steel gates in front of a vetted crowd as protesters scuffled with police outside and Beijing supporters waved Chinese flags and banged drums.

Campaigners are protesting against China's crackdown on pro-independence activists in Tibet and its human rights record. Falun Gong and the Burma Campaign are also demonstrating.

"The welcome of the Olympic torch to London is not the same as condoning the human rights regime in China or condoning the treatment of Tibet," she told BBC Television.

The London relay proved a nightmare for 2,000 police officers guarding the 80 athletes and celebrities carrying the flame by foot, bike, boat and bus across the capital for about eight hours.

Five times gold medallist Steve Redgrave started the torch's 31-mile (50-km) journey through the capital at Wembley, and police scuffled with protesters outside the stadium trying to stop it from being carried on to a double-decker bus.

Two protesters tried to douse the flame with a fire extinguisher and dozens hurled themselves into the path of the torchbearers.

Television personality Konnie Huq said she had been "a bit bashed about" when a man tried to rip the torch from her hands.

"I was determined to hang on, it was all a bit of a shock. People were shouting 'just keep going'," Huq told the BBC.

China's ambassador to London Fu Ying had been scheduled to carry the torch outside the Chinese embassy but she instead carried it through Chinatown, an area free of protesters.

Chinese security forces have locked down Tibet and neighbouring provinces to quell anti-Chinese protests and riots that started in mid-March.

China has said the Games should not be politicised and the IOC has vigorously defended its police of non-involvement in politics.