Russian President Vladimir Putin arrived in Zagreb on Sunday, where he was invited by his Croatian counterpart Stjepan Mesic to participate as a special guest in a regional energy summit. 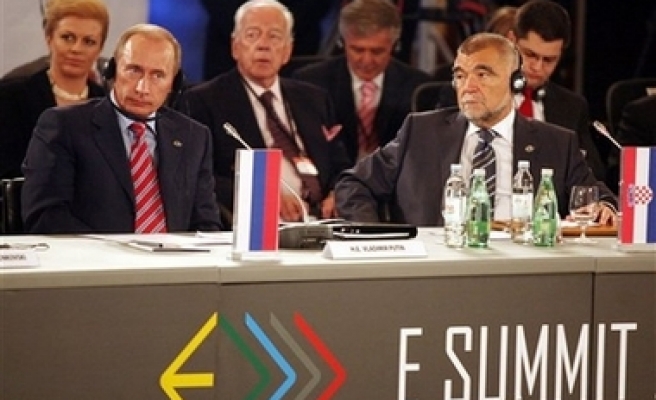 Russian President Vladimir Putin arrived in Zagreb on Sunday, where he was invited by his Croatian counterpart Stjepan Mesic to participate as a special guest in a regional energy summit.

Putin's arrival in Croatia is being accompanied by increased security measures, keeping the exact time of his touching down at the Zagreb airport a secret until moments before landing.

Among others, Serbian President Boris Tadic and Albanian President Alfred Moisiu would be present at the energy Summit, and are scheduled to meet with Putin.

Surprisingly, Sergei Prikhodko, deputy head of Putin's administration, told Zagreb media that there would be no discussion of the Kosovo status crisis, the region's most pressing issue currently.

However, Putin's adviser said that the Russian president is looking forward to hearing everyone's 'stance on the Kosovo situation,' but that solutions would not be discussed because 'that question is firstly a question of consensus between the Kosovo Albanians and Serbs.'

Russia has recently taken a very strong stance in supporting the Serbian administration's goal of maintaining sovereignty over its breakaway southern province of Kosovo, which has a majority ethnic Albanian population seeking independence.

The United States and European Union support a plan developed by UN Kosovo envoy Martti Ahtisaari, after a year of fruitless negotiations between Serbian and Albanian officials, which foresees an internationally-supervised independence for Kosovo.

Russia, which holds the right of veto within the United Nations Security Council, has stated that it would reject all proposed UN resolutions that do not respect the interests of both sides.