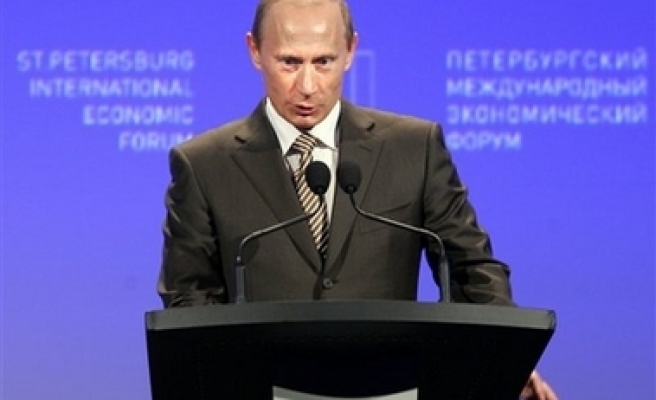 Days after attending a Group of Eight summit in Germany, Putin suggested that club was outdated and failed to reflect a shift in economic power away from the industrialized West to countries like his own.

"If 50 years ago, 60 pct of the world's gross domestic product came from the G7, now it's the other way round, and 60 percent of the world's GDP is produced outside," Putin said in a speech to a major economic conference.

He also took aim at financial organizations such as the International Monetary Fund and
World Bank, saying they were created in "a completely different reality" and had lost relevance in the fast-changing global economy.

Russia is enjoying an unprecedented spell of economic growth that has enabled it to pay down its foreign debts and accumulate foreign exchange reserves of over $400 billion -- the world's third largest.

Putin said the world needed to reduce its dependency on the dollar as a reserve currency, and plugged the ruble as one alternative. Russia abolished capital controls last year.

But he called for industrialized nations not to throw up barriers to Russian companies seeking to invest abroad.

"We see how in developed countries despite the doctrine of free investment there are completely different approaches," he said.

"It turns out that foreign investment is not always seen as positive and foreign participation is practically closed in those sectors such as infrastructure, telecoms and energy." Last Mod: 10 Haziran 2007, 16:52
Add Comment