Putin: Missile test response to US

President Vladimir Putin said Thursday that tests of new Russian missiles were a response to the planned deployment of U.S. missile defense installations and other forces in Europe, suggesting Washington has triggered a new arms race. 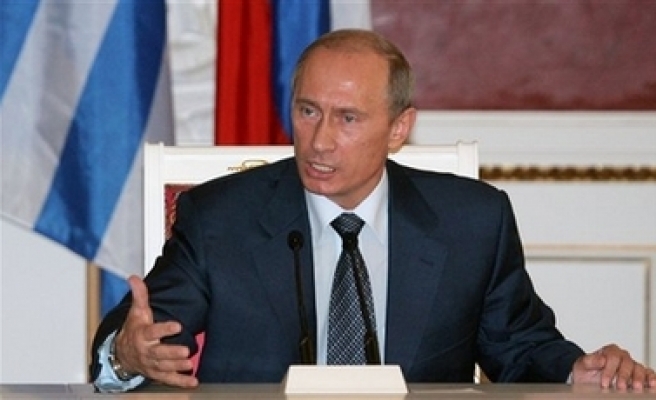 President Vladimir Putin said Thursday that tests of new Russian missiles were a response to the planned deployment of U.S. missile defense installations and other forces in Europe, suggesting Washington has triggered a new arms race.

In a clear reference to the United States, he harshly criticized "imperialism" in global affairs and warned that Russia will strengthen its military potential to maintain a global strategic balance.

"It wasn't us who initiated a new round of arms race," Putin said when asked about Russia's missile tests at a news conference after talks in the Kremlin with Greek President Karolos Papoulias.

Putin described Tuesday's tests of a new ballistic missile capable of carrying multiple nuclear warheads and a new cruise missile as part of the Russian response to the planned deployment of new U.S. military bases and missile defense sites in ex-Soviet satellites in Central and Eastern Europe.

He assailed the United States and other NATO members for failing to ratify an amended version of the 1990 Conventional Forces in Europe (CFE) treaty, which limits the deployment of heavy non-nuclear weapons around the continent.

"We have signed and ratified the CFE and are fully implementing it. We have pulled out all our heavy weapons from the European part of Russia to (locations) behind the Ural Mountains and cut our military by 300,000 men," Putin said.

"And what about our partners? They are filling Eastern Europe with new weapons. A new base in Bulgaria, another one in Romania, a (missile defense) site in Poland and a radar in the Czech Republic," he said. "What we are supposed to do? We can't just sit back and look at that."

Putin and other Russian officials have repeatedly rejected U.S. assurances that the planned missile defense installations are meant to counter a potential threat from nations such as Iran and pose no danger to Russia.

Putin reaffirmed his warning that Russia would opt out of the CFE treaty altogether if NATO nations fail to ratify its amended version.

"Either you ratify the treaty and start observing it, or we will opt out of it," Putin said.

In remarks clearly directed against Washington, Putin blasted those "who want to dictate their will to all others regardless of international norms and law."

"It's dangerous and harmful," he added. "Norms of the international law were replaced with political expediency. We view it as diktat and imperialism."

Russia this week initiated an international conference to be held in Austria in early June to discuss the situation around the CFE treaty.

Putin described the tests of new missiles conducted by Russia on Tuesday as a necessary response to the Western action.

"There is no reason to fear these actions by Russia, they aren't aggressive. It's merely a response to tough and unfounded unilateral actions by our partners," he said. "These actions are aimed at preserving a global balance."

In one missile test Tuesday, a prototype of new Russia's intercontinental ballistic missile, called the RS-24, was fired from a mobile launcher at the Plesetsk launch site in northwestern Russia and its test warhead landed on target 3,400 miles away on the Far Eastern Kamchatka Peninsula, officials said. Russia's military also tested a new cruise missile based on the existing short-range Iskander missile.

"We will keep modernizing our potential," Putin said.