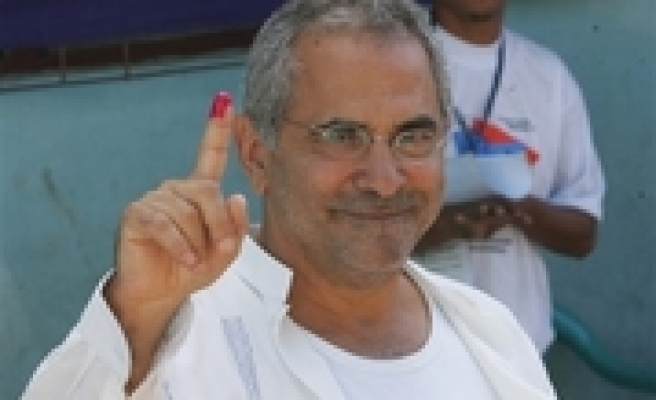 Commission spokeswoman Maria Sarmento said Ramos-Horta had so far won around 70 percent of the votes cast in Wednesday's election. The other candidate in the second-round of the vote is former guerrilla fighter Francisco "Lu-Olo" Guterres.

"Jose Ramos-Horta leads for the time being," Sarmento told a media conference in the capital, Dili.

She said provisional results of the election were scheduled to be released later Thursday, a day earlier than previously anticipated.

Voting had been peaceful and free of intimidation, said Atul Khare, the U.N. special representative in East Timor, raising hopes the ballot may prove to be a turning point for the country which has struggled with violence and poverty since breaking free from decades of Indonesian rule in 1999.

A spokesman for Guterres said the former resistance fighter was still confident of victory, but repeated earlier statements that he would accept the result.

"In a democracy whoever get the most votes wins," said Harold Moucho.

Ramos-Horta, who is currently the prime minister of the tiny nation, had been seen as the favorite by analysts in the contest against Guterres, a former member of East Timor's resistance to the occupation.

Wednesday's vote followed a first round of voting last month that failed to produce an outright winner among eight candidates.

The new president will have to heal deep political and regional divisions in Asia's newest country.

Last year, the country descended into violence that killed dozens of people, drove 155,000 others from their homes, and toppled the government.

"If Ramos-Horta wins, it will not be a victory over Lu-Olo but a victory for East Timorese democracy and values," said Maria Fernandes, a 46-year-old school teacher. "I hope Horta will be able to embrace all Timorese."

Despite sizable offshore oil and gas deposits, nearly half of East Timor's work force is unemployed, about 60 percent of children under 5 are malnourished, and tens of thousands of people displaced last year remain in tent camps.

More than 524,000 people were eligible to vote in Wednesday's poll, and election officials said the turnout would likely top 80 percent.