Estonia demanding compensation from Moscow for the occupation and Communist reprisals against its people. 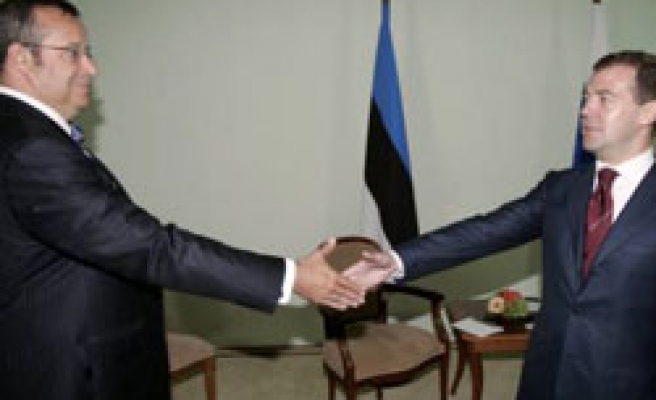 The presidents of Russia and Estonia found little common ground to improve relations at a rare meeting on Saturday.

Ties between Russia and Estonia hit all-time lows when Estonia decided to move a World War Two monument to Soviet soldiers from the capital Tallinn's centre. Moscow said the move showed disrespect to fighters of fascism.

"We have seen meetings warmer than that," a senior Kremlin official told reporters describing the atmosphere at the talks.

"President Ilves spoke in favour of easing public rhetoric in bilateral relations," Medvedev's chief foreign policy adviser Sergei Prikhodko told reporters. "Dmitry Medvedev replied that he is aware of many tough statements by Ilves about Russia, but has never resorted to this himself."

Estonia, part of the Soviet Union for 51 years after the Red Army seized it, has demanded compensation from Moscow for the occupation and Communist reprisals against its people.

Russia accuses Estonia of discriminating against its large Russian-speaking minority.

Russian and Estonian leaders have never paid each other visits in the post-Soviet period. The last informal meeting was held in 2005 during an Estonian president's private visit to Moscow.

But Prikhodko said Moscow did see Medvedev's meeting with Ilves as potentially useful.

"If this conversation can give some positive impetus to the course of the Estonian leadership in Russian-Estonian relations and other issues, including that concerning the Russian-speaking population, we will be happy," he added.