Head of the Turkish Religious Affairs Directorate has stated that recent claims over Turkey making reforms to Islam are tarnishing Turkey's image in the Islamic world. 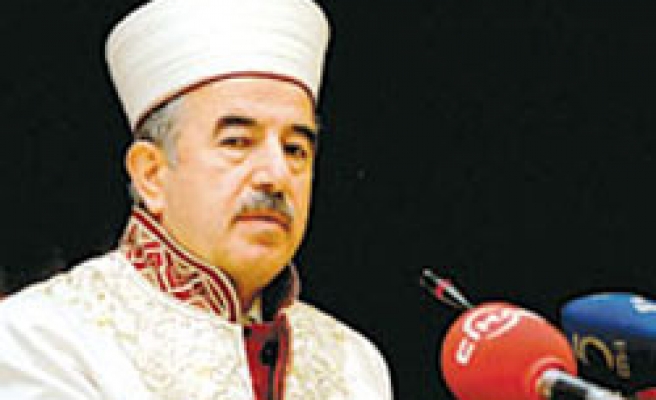 Head of the Turkish Religious Affairs Directorate Ali Bardakoğlu has stated that recent claims over Turkey making reforms to Islam are totally unsubstantiated and are tarnishing Turkey's image in the Islamic world.

"Even though we have consistently emphasized that our work on hadiths [oral traditions relating to the words and deeds of the Prophet Mohammed] is definitely not a reform of the religion every time we speak to journalists, some people are still trying to put words in our mouths," Bardakoğlu told Today's Zaman.

He complained that he had been unable to rectify the situation of deliberately false news stories being frequently published in certain newspapers. He noted that these purposefully biased reports are embarrassing Turkey in the Islamic world as well as in the West.

"People are not conveying the reality; they are imposing their own views on this project. Their attempts to portray this serious work as a reform both in the East and the West, as if saying, 'If I were you, I would make reforms to the religion,' and their claims are completely imagined and far from the truth. These claims are only serving to expose their obsessions and fallacies," he stated.

In response to our question on what the real purpose of the project is, he said: "It is to form a collection of hadiths by classifying the authentic sayings of our Prophet into subjects to benefit more from them in our daily lives and to make them our guide. It is to understand and to help people to understand how we should integrate the sayings of our beloved master into the 21st century and what these sayings should bring into our daily lives and relations. It's nobody's place to discuss any saying of our Prophet, and it would be a very unbecoming behavior for a Muslim."

Bardakoğlu particularly emphasized that some Westerners are trying hard to show this project as "a reform to religion" to suggest to the Islamic world that Turkey is distancing itself from it.

"We have continually noted that there can be no reform in Islam because there is no need for that. Islam's inherent knowledge and scripture are very clear. We have the holy Quran, even a single letter of which has not been changed, and this holy book clearly shows us what Islam is. Also, the sayings and actions of our Prophet are obvious and clear. What we have is not an Islam that changes from on person to another or from one interpretation to another. And this being the truth, people cannot possibly change a single part of the Quran or Sunnah, which are the two inseparable essences of the religion. Those who think they have managed to make 'positive' reforms to the religion may receive some appreciation from ignorant people. But the things they say and write are like words written on water; they will disappear in no time, and the authentic, undistorted religion will continue to exist the way it has existed for the last 14 centuries. He who sent this religion is Allah, and it is He who will protect it. People will never be able to make reforms to the religion," he noted, adding that we should "refresh" and "revive" our piety and religiosity continually in the light of the Quran and Sunnah in order to form an understanding of religiosity that befits a modern Muslim. "And this is not reform," he added.