Ahmadinejad said the region could handle its own security without U.S. and other foreign forces although he did not name arch foe, the United States. 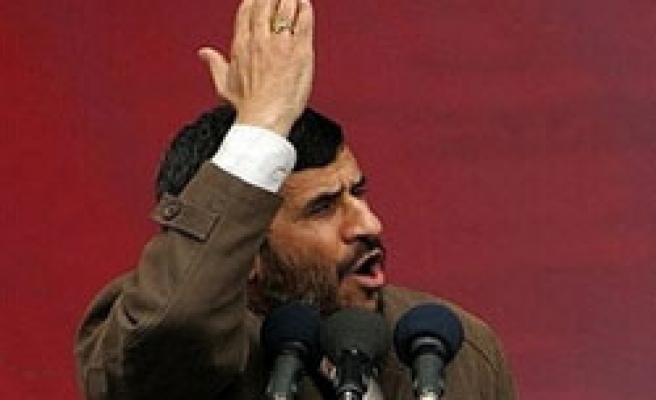 Iranian President Mahmoud Ahmadinejad said on Thursday "satanic" foreign forces had failed in their bid to dominate the Middle East's energy resources and did not dare threaten Iran.

Ahmadinejad also said at a military parade the region could handle its own security without U.S. and other foreign forces although he did not name arch foe, the United States.

"We saw that oppressive, arrogant ... and satanic powers planned, using a suspicious excuse to gain dominance over the world's energy reserves ..., brought their troops to our region," Ahmadinejad said at the annual ceremony.

"Today they have failed," he said in the televised address shortly before warplanes and helicopters flew overhead and troops marched passed the podium set up south of Tehran.

Equipment on show included several missiles on trucks but did not include the Shahab-3, which officials have said is Iran's longest range projectile capable of hitting targets 2,000 km (1,250 miles) away.

"The Iranian nation has reached a level that none of the world powers dare to threaten (it)," he said, adding that Iran would respond powerfully to any attack.

He said Iran would stand by its neighbours to spread peace and security in the region without the presence of foreigners.

Iran has regularly demanded the United States and its Western allies withdraw from Iraq and the region, as well as calling for a security pact with nearby Gulf Arab states.

The president said Iran was capable of domestically making most of its main military equipment needs and said this included tanks, aircraft and other weaponry, some of which was included in the parade.

Wonderful man Ahmedinejad. I am a Sunni Turc yet so proud of your honourable standing up against the "arrogant"... Yes arrogant indeed.. I do believe this is the spirit of Hz.Huseyin when he walked in spite of the arrogant, which I do not need to be in any side in order to deeply admire and love.. I applaud you and love you. You give us hope against the arrogance winning...