Report: Iraq state on the verge of collapse

With its government already largely irrelevant, Iraq is on the "verge of becoming a failed state" that risks collapse and fragmentation, a leading think-tank has warned. 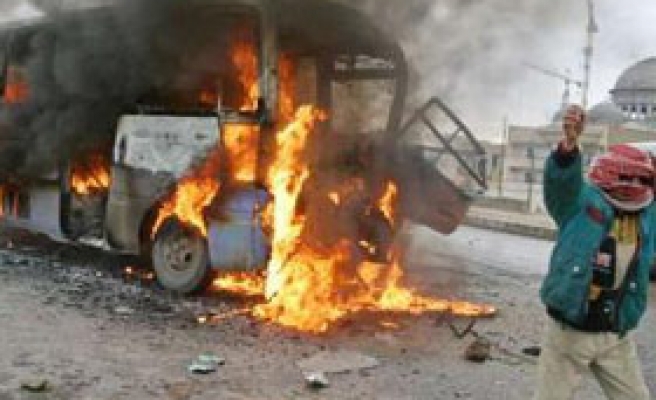 With its government already largely irrelevant, Iraq is on the "verge of becoming a failed state" that risks collapse and fragmentation, a leading think-tank has warned.

"It can be argued that Iraq is on the verge of being a failed state which faces the distinct possibility of collapse and fragmentation," Royal Institute of International Affairs (RIIA), known as Chatham House, said in a report on its website.

"Iraqi nationalisms exist, but one distinct 'Iraqi' nationalism does not," argues the report, "Accepting Realities in Iraq".

"Iraq has fractured into regions dominated by sectarian, ethnic or tribal political groupings that have gained further strength from their control of informal local economies."

Gareth Stansfield, the Middle East politics expert who authored the report, believes Iraq is plagued by "many civil wars" and not an easily-defined sectarian conflict between Shiite and Sunnis.

"The coming year will be pivotal for Iraq," he said.

"On current evidence these realities are very disturbing and it can no longer be assumed that Iraq will survive as a united entity."

Without a UN authorization, the US invaded Iraq on claims of stockpiling weapons of mass destruction, a claim that later turned out to be false.

Four years later, the country is gripped by a bloody cycle of violence that claims the lives of a hundred people on a daily basis.

The leading London-based think tank described the US-backed government of Nuri al-Maliki as only one among many "state-like" actors.

"The Iraqi government is not able to exert authority evenly or effectively over the country," concluded the report.

"At best, it is merely one of several ‘state-like actors’ that now exist in Iraq."
Across huge swathes of warring territory, the report notes, the government is largely irrelevant in terms of ordering social, economic, and political life as rival factions struggle for local supremacy.

"They have fallen out of the orbit of the Iraqi government’s control and instead succumbed to the power gained from the barrels of the guns of whichever group manages to dominate a particular area."

"It would be a mistake to believe that the political forces in Iraq are weak and can be reorganized by the US or the international community," it said.

"There must be 'buy-in' from the key Iraqi political actors."

US president George W. Bush has long taunted Maliki's coalition government as one of his major accomplishments.

Complaining that the much-publicized national reconciliation efforts remain largely ink on paper, the Sunni Accordance Front has threatened to withdraw from the Shiite-led government and parliament.

The coalition is already damaged by the mid-April pullout of six ministers loyal to Shiite leader Muqtada al-Sadr.

The reputed British think tank described as counterproductive desperate steps taken by the US lately to overcome the unwinnable situation in Iraq.

It warned that deploying thousands of additional American troops in the capital is moving violence elsewhere instead of stemming it.

"The recent US 'surge' in Baghdad looks likely to have simply pushed insurgent activity to neighboring cities and cannot deliver the required political accommodation," said the report.

"The security situation remains as perilous as before the surge," it assessed.

Struggling with war resentment both inside Iraq and at home, Bush has ordered the deployment of 20,000 additional troops earlier this year.

The British report said that the number of multiple fatality bombings in Iraq remained constant in March and April.

According to the Iraqi authorities, 1,500 civilians were killed in April alone.

Stansfield argues in his report that al-Qaeda group is gaining a clear momentum in its activities inside Iraq.

"Al-Qaeda has a very real presence in Iraq that has spread to the major cities of the center and north of the country."

He believes Iraq's neighbors have a greater capacity to affect the situation on the ground than either the troops of the UK or the US.

Iranian Foreign Minister Manouchehr Mottaki confirmed Thursday that Iranian and American officials will meet in Iraq on May 28 for talks on its security crisis.

It is believed the talks would be the first official bilateral ambassadorial encounter between the arch-foes since they froze relations after Iran's 1979 Islamic revolution.

The Bush administration has long resisted calls from Democrats and a recommendation from the Iraqi Study Group to engage directly with Syria and Iran to help stabilize Iraq.
Last Mod: 17 Mayıs 2007, 19:26
Add Comment