Rice calls for respect of Turkish democracy in AKP case

US Rice said Turkey's democratic principles should be respected as the nation's top court mulls a case that could shut down its ruling party. 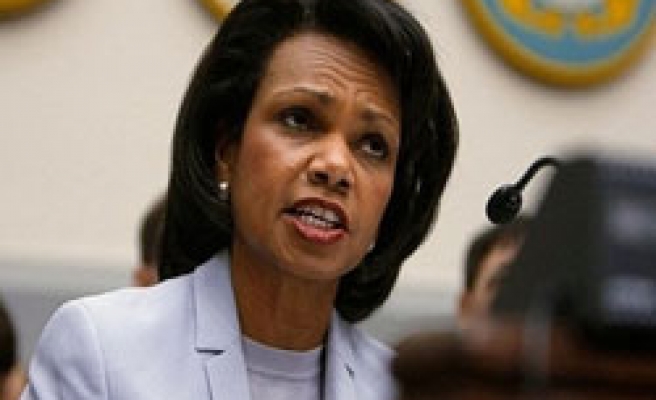 US Secretary of State Condoleezza Rice said Tuesday Turkey's democratic principles should be respected as the nation's top court mulls a case that could shut down its ruling party.

Tip-toeing into a row that has provoked disquiet in the European Union, Rice said the lawsuit threatening the Justice and Development Party (AKP) was a "matter obviously for the Turks to decide."

"We believe and hope that this will be decided within Turkey's secular, democratic context," she told an annual conference of the American Turkish Council attended by business leaders, politicians and top diplomats.

"But I think it is in everybody's interests that it be done in this way, that the voters will be heard: Turkey has democratic institutions," she said.

Turkey's Constitutional Court decided earlier this month it would hear a case to outlaw the AKP since AKP is allegedly "a focal point of anti-secular activities".

Foreign Minister Ali Babacan said in an interview published Tuesday that the party may propose new legislation that would stop the country's top judicial body from closing it down.

Speaking to the Financial Times, Babacan insisted that the AKP fully supported "separation of the state and religion," but added that Turkish laws were out of step with European standards.

EU Enlargement Commissioner Olli Rehn signaled last month that Turkey's accession talks to join the powerful bloc, which opened in 2005, could be derailed if the AKP is banned.

Rice noted the US administration's strong support for the EU membership drive of its NATO ally Turkey, and also reaffirmed their shared determination to root out their "common enemy," the outlawed Kurdistan Workers' Party (PKK).

And she congratulated Prime Minister Recep Tayyip Erdogan for planning to revise Article 301 of the Turkish penal code, which makes insulting the state a criminal offense.

Turkey's "struggles continue" as the Erdogan government entrenches political freedoms such as liberty of speech, the secretary of state said.