Rice said Russia had used its overwhelming force to beat up a small neighbor and former Soviet republic. 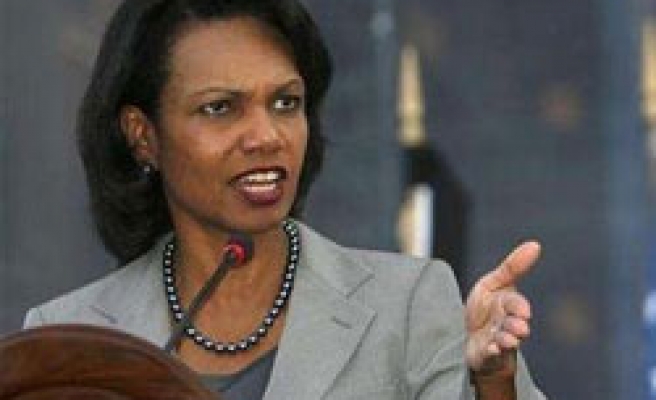 The United States accused Russia on Tuesday of targeting civilians in its conflict with Georgia and said Moscow wants to strangle Tbilisi, the latest in a steadily escalating stream of criticism from Washington.

"It's becoming more and more the outlaw in this conflict," U.S. Secretary of State Condoleezza Rice said of Russia in an interview with "CBS Evening News."

"They intend and probably still do intend to strangle Georgia and its economy," she told CBS in the interview in Brussels, where she attended a NATO meeting on the crisis.

Rice said Russia had used its overwhelming force to beat up a small neighbor and former Soviet republic.

"Well, that's what they've done -- wanton destruction of civilian infrastructure, reports of the use of munitions that should never be used against civilians, the harassment along highways of legitimate comers, the closing of the Port of Poti, which is now starting to affect neighboring states," she said.

"I think this is not a very good picture for Russia's strategic objectives."

Conflict between Georgia and Russia erupted when Georgia tried to reimpose control over the breakaway, pro-Russian South Ossetia region on Aug. 7-8. Russia responded with a massive counter-attack that overwhelmed Georgian forces.

Russia then moved troops beyond South Ossetia and a second separatist region, Abkhazia, and into Georgian territory.

The United States has repeatedly condemned Russia's response, saying Moscow went too far. U.S. officials also have voiced frustration for several days that Russia promised to remove troops under a French-brokered ceasefire, but have not done so.

On Tuesday, U.S. officials said they had not seen any serious pullout of Russian forces from Georgia.

Moscow said it would pull its forces back by Aug. 22 to positions held before the conflict began. A column of Russian tanks and armored vehicles left the Georgian city of Gori on Tuesday.

"We call on them to leave immediately," State Department spokesman Robert Wood said.

Matt Bryza, the State Department diplomat who was sent to Georgia after the crisis erupted, said the United States warned Georgia against a fight with Russia.

"Our message was consistent to our Georgian colleagues ... 'Avoid a direct military confrontation with Russia at all costs. You cannot prevail. It simply is not possible,'" he said.

"Russia is 30 times as big as Georgia, its military is several times as large," he told reporters.

"It can almost instantaneously roll tanks in. And then even if you succeed miraculously in stopping the tanks, and the infantry, and the mechanized infantry, which move very quickly, it's the air power that's finally going to get you. And that is what happened."

The conflict spooked investors and sent Russian stocks tumbling to their lowest levels in nearly two years. It also rattled oil markets because a key pipeline runs through Georgia.

Russian forces appear to have taken five Humvee U.S. military vehicles that were awaiting shipment out of the Georgian port of Poti after a recent military exercise with Georgian troops, the senior defense official said.

But the official played down the significance of the incident, saying he was not aware that it was prompting major interest among senior officials.

"If the Russians have it, it needs to be returned immediately," White House spokesman Gordon Johndroe said.