The United States met Sunni-led Arab allies on Monday to try to persuade them to back Iraq's Shiite leadership but failed to clinch any concrete commitments on debt relief or diplomatic presence. 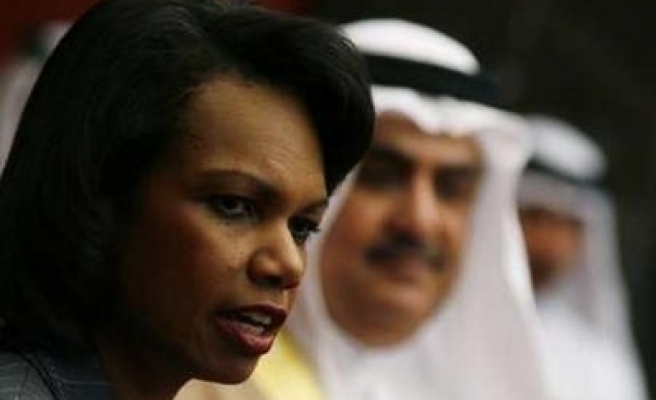 Speaking after the meeting in Bahrain with counterparts from eight Arab countries and Iraq, US Secretary of State Condoleezza Rice said the talks covered relieving Iraq of billions of dollars in debt and sending ambassadors to the war-torn nation, but she did not report any decision on either score.

"I do believe it's a process which will move forward," she told reporters after the meeting with the Arab diplomats, which came one day after she made a surprise visit to Baghdad.

"A number of countries around the table talked about their desire to have permanent representatives" in Baghdad, she said.

"The terms of debt relief have long been known. It's just a matter of getting the negotiations done," Rice added.

Rice said she and the Arab ministers had agreed that Iraq should become a regular participant in the 6+2+1 meetings that have brought together the six oil-rich Gulf Arab states, plus Jordan, Egypt and the United States four times since January 2007.

"It is the view of the members of this group that Iraq should become a regular participant in its discussions ... I think that's a very good step forward for the reintegration of Iraq into regional affairs," she said at a joint news conference with Bahraini Foreign Minister Sheikh Khaled bin Ahmad al-Khalifa.

"We're now in the process of choosing our ambassador" to Baghdad, Sheikh Khaled said without giving a timeline.

The Bahrainis are "having discussions with Iraq on that matter," he added.

The United States has been pressing Arab allies to send ambassadors to Baghdad and help restructure Iraq's billions of dollars in debt, most of which dates back to the Saddam Hussein era.

Gulf states, especially OPEC members Saudi Arabia and Kuwait, agreed several years ago to forgive a substantial part of Iraqi debt, estimated to total tens of billions of dollars. Iraq wants this to be translated into action.

Rice sought to persuade her counterparts from Bahrain, Kuwait, Oman, Qatar, Saudi Arabia and the United Arab Emirates, as well as those of Egypt and Jordan, that Iraq's Shiite leadership was now fighting for national interests, rather than sectarian ones.

Bahrain's foreign minister said the Arab diplomats had questions about "the ambiguity of the political picture" in Iraq, but received a "very good explanation" from Rice and Iraqi Foreign Minister Hoshyar Zebari.

Zebari himself had earlier hailed his participation in the meeting as a "qualitative leap" that would help Iraq.

Rice was due to head to Kuwait where she will pursue talks with Iraq's neighbours as well as major powers on Tuesday.