Rice, Gates due in Moscow for missile talks

Top US officials Condoleezza Rice and Robert Gates were to hold talks on missile defence on Monday with Russian President Vladimir Putin and his successor in waiting Dmitry Medvedev. 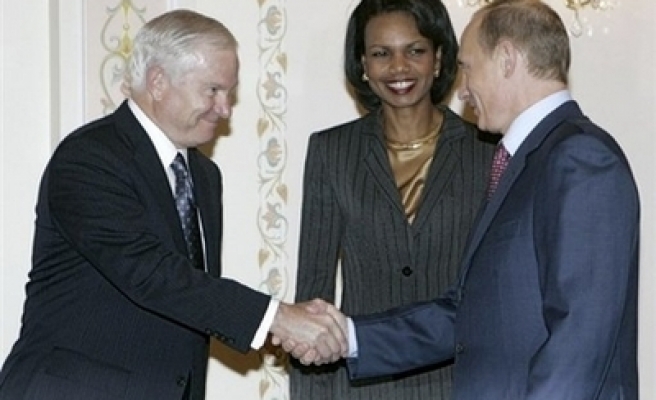 Tensions are mounting over US plans to place missile defence facilities in eastern Europe, while possible expansion of the NATO military alliance, which Moscow also opposes, is simultaneously rising up the international agenda.

As he flew to Moscow, Gates said he wanted Russia to be more flexible on the US plans for missile defence facilities in the Czech Republic and Poland.

"We have put a lot on the table. We are willing to explain it further, but now it is time for them to reciprocate," he told journalists.

The Czech Republic has indicated it could conclude a deal on hosting part of the planned US missile defence facilities by the time of a NATO summit on April 2-4 in Bucharest.

At the summit, two ex-Soviet states, Ukraine and Georgia, hope to get the go-ahead to begin formal adhesion to NATO, while a visit by President George W. Bush to Ukraine before the summit could also ratchet up tensions.

Russia sees the US plans to place a missile defence radar in the Czech Republic and interceptor missiles in Poland as a threat to its security, the two host countries both being formerly part of the Warsaw Pact and under Moscow's control in the 20th century Cold War.

Ahead of the visit Gates and Rice indicated they were not ready to move substantially beyond a set of proposals aimed at reassuring Russia that they set out on a previous visit last October.

The US proposals included a possible slow-down on putting the sites into service until there was proof of an "Iranian threat". Russian inspectors could also be allowed on the sites in the Czech Republic and Poland.

The US officials, representing an administration that is in its final months, were also to discuss the future of the strategic arms reduction treaty (START) which runs out at the end of 2009, as well as cooperation on non-proliferation, counter-terrorism and arms sales, US officials said.

Russian analysts doubted that Monday's talks would lead to any major breakthrough due to electoral transitions underway in both countries.

On March 8 Putin warned Germany's Chancellor Angela Merkel that the West should not expect an easier ride under his reputedly more liberal successor, saying that "I do not think that with him the partnership will be more simple."

Medvedev was elected on March 2 and is due to be inaugurated in early May.