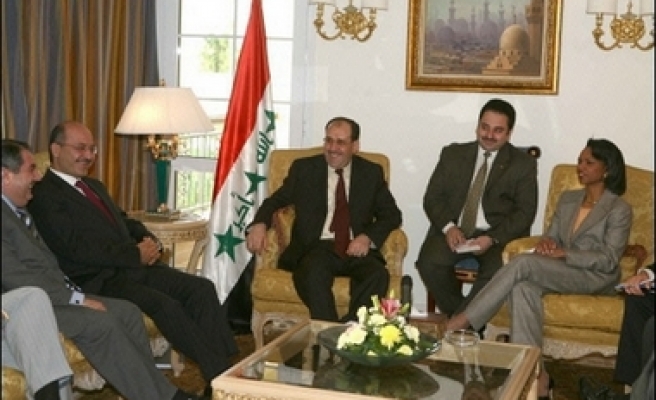 Secretary of State Condoleezza Rice met Syria's foreign minister Thursday in the first high-level talks between the two countries in years, hours after the chief military spokesman in Iraq said Syria had moved to reduce "the flow of foreign fighters" across its border.

Still, a substantive U.S.-Iran meeting appeared less certain. The Iraqi government is pressing for Rice and her Iranian counterpart to hold talks during the gathering, saying Washington's conflict with the government in Tehran is only fueling the instability in Iraq.

Rice and Syrian Foreign Minister Walid Moallem met on the sidelines of Thursday's conference. Earlier, a senior State Department official said they would discuss "Iraqi security issues." The official spoke on condition of anonymity because the meeting was still being arranged.

Both the United States and Iran had also spoken favorably of a possible meeting, but the chances for that remained unclear.

Iraq and the United States hope Thursday and Friday's conference of nearly 50 nations at this Egyptian Red Sea resort will rally international support — particularly from Arab nations — for an plan to stabilize Iraq.

Iraq is pressing for forgiveness of debt and for Arabs to take greater action to prevent foreign fighters from joining the Iraqi insurgency. Arab countries, in turn, demand his government ensure greater participation by Sunni Arabs in Iraq's political process, echoing the United States.

Iraqi Prime Minister Nouri al-Maliki opened the conference by urging all countries to forgive his country's enormous foreign debts — estimated at about $50 billion. Another $100 billion has already been written off by the Paris Club of lender nations.

But Saudi Arabia's foreign minister, Saud al-Faisal, told the conference only that his country "has expressed its readiness to alleviate some of the debts on Iraq" and was currently in discussions with Iraqi officials to deal with the issue "in line with the regulations and bases of the Paris Club."

Al-Faisal, addressing the conference, renewed a Saudi offer of $1 billion in loans to Iraq, on the condition that the money be distributed equally among "Iraq's geographical sectors."

Rice has also said she was willing to meet Iranian Foreign Minister Manouchehr Mottaki, after years of accusations and name-calling between the nations. Iranian President Mahmoud Ahmadinejad had also expressed interest in such a meeting.

During Thursday's session, the two sat on far ends of the large conference hall where the ministers and top diplomats from nearly 50 nations gathered. They both attended a lunch along with the other foreign ministers.

In his speech, Mottaki blamed Iraq's turmoil on "the flawed policies of the occupying powers" — referring to the U.S.