Rice: Russia should not worsen tension in Georgia

Tension has been rising in Georgia's breakaway regions of South Ossetia and Abkhazia, both the focus of friction between the pro-Western government in Tbilisi and neighbouring Russia, which supports the separatists. 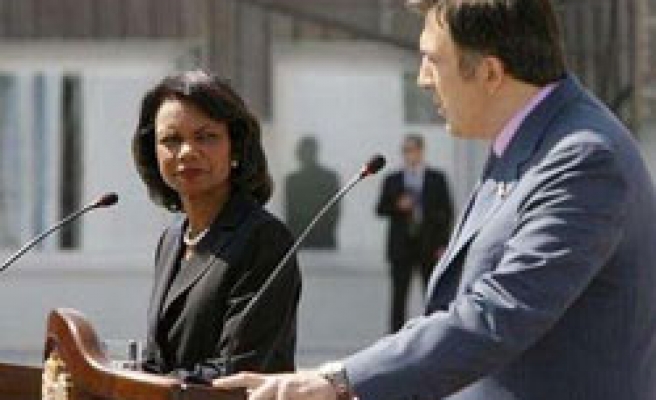 Russia should help resolve tension over Georgia's rebel regions instead of contributing to it, U.S. Secretary of State Condoleezza Rice said on Thursday, and she urged an end to violence there.

"The violence needs to stop and whoever is perpetrating it, and I have mentioned this to the president, there should not be violence," she said, standing alongside Georgian President Mikheil Saakashvili.

"It is very important that all parties reject violence as an option. There must be a peaceful solution."

Tension has been rising in Georgia's breakaway regions of South Ossetia and Abkhazia, both the focus of friction between the pro-Western government in Tbilisi and neighbouring Russia, which supports the separatists.

Rice also she said she wanted international mediation on the conflicts to be shifted to a higher level.

The two regions broke away from Tbilisi's rule after wars in the 1990s, but they have no international recognition.

Russia, which has peacekeepers in the regions, says Tbilisi wants to use force to re-establish its control, and that the local populations do not want to be part of Georgia.

Georgia, a staunch U.S. ally seeking NATO membership, says Moscow wants to annex the regions. It accuses Russia of using the separatists to cause instability.

Earlier this year Russia established semi-official ties with the separatist administrations and reinforced its peacekeepers in Abkhazia. The United States and European Union said those moves risked stoking tension.

The conflict has recently turned bloody. Four people were killed when a bomb exploded in a cafe in Abkhazia on Sunday and two died when rebels clashed with Georgian troops in South Ossetia last week.

The rise in violence follows the resumption of talks between Moscow and Tbilisi and media reports that the two are trying to tease out a compromise deal likely to anger hardliners.