It was her first comment on the subject since Washington changed usual policy and joined nuclear talks with Iran in Geneva on Saturday. 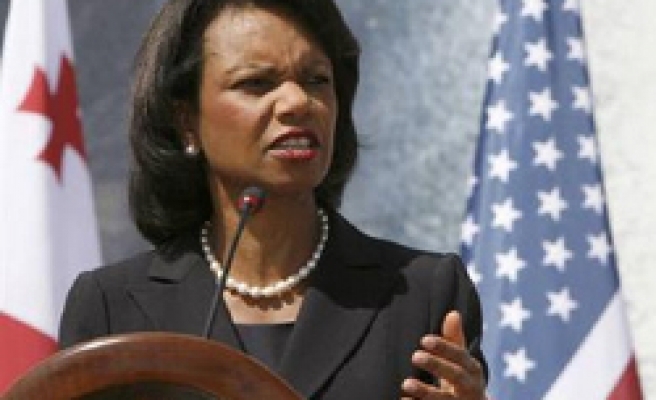 U.S. Secretary of State Condoleezza Rice threatens Iran on Monday to face more sanctions if it a two-week deadline is passed to curb its nuclear program.

Rice said Iran was stalling and must give a "serious answer" within the deadline set by six world powers, which offered trade and technical incentives if Tehran halts its uranium enrichment.

"We are in the strongest possible position to demonstrate that if Iran does not act then it is time to go back to that (sanctions) track," Rice said,

It was her first comment on the subject since Washington changed usual policy and joined nuclear talks with Iran in Geneva on Saturday.

In Jerusalem, British Prime Minister Gordon Brown alsosaid on Iran, it faced growing isolation if it rejected the offer from the major powers.

"Iran has a clear choice to make: suspend its nuclear program and accept our offer of negotiations or face growing isolation and the collective response not just of one nation but of all nations around the world," Brown said.

He said Britain would continue, with the United States and its European partners, "in our determination to prevent an Iranian nuclear weapons program."

"The main thing is we will have to start considering what we do in New York," she said, referring to the Security Council which has imposed three rounds of sanctions on Iran.

Envoys from the United States, Russia, China, France, Germany and Britain -- the so-called sextet of world powers -- attended the Geneva meeting as well as Iran.

Iran's top nuclear negotiator, Saeed Jalili, said at the next meeting Iran would not discuss the demand to freeze its nuclear work.

Iranian President Mahmoud Ahmadinejad gave an upbeat assessment on Sunday. "Any negotiation that takes place is a step forward," he told reporters, according to IRNA news agency.

A senior Iranian official said Iran was ready to respond to any positive U.S. overture but it was unclear whether Washington had decided between diplomacy and force.

The U.S. government was "indecisive about whether to lean on diplomacy or the military option," said Deputy Foreign Minister Alireza Sheikh-Attar, according to the student news agency ISNA on Monday.

"I understand that it was at times meandering," Rice said.

"It was also a very strong message to the Iranians that they can't go and stall and make small talk and talk about culture and that they have to make a decision," said Rice.

Burns will brief Rice during her one-night stopover in Abu Dhabi, where she will meet her counterparts from Gulf states as well as Iraq, Egypt and Jordan on Monday.