The United States and Spain share concerns on many fronts, but Spain is going its own way in its relations with Cuba, U.S. Secretary of State Condoleezza Rice says. 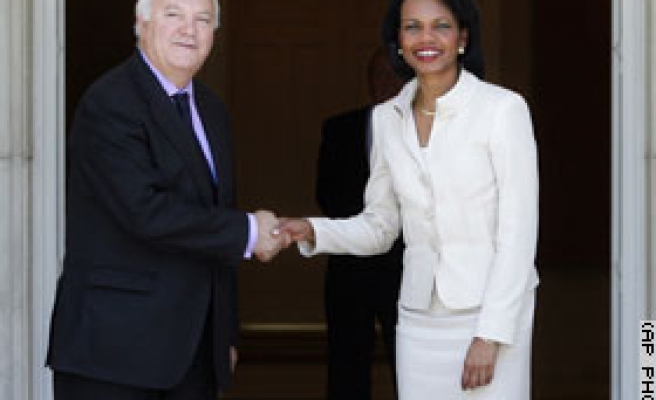 The two countries have recovered from the rift over Spain's withdrawal of its troops from Iraq, she said, but Spain's communications with the Cuban government remain a sore spot.

Rice said the United States had problems with the way Spain withdrew from Iraq, not the fact that it took its troops out.

"We can say that the relations are normalized after the ups and downs you all know about," said Spanish Foreign Minister Miguel Angel Moratinos, who appeared at a Madrid news conference with Rice.

Both the United States and Spain would like democracy in Cuba, which Moratinos visited in April. His aides visited Havana earlier this week.

Referring to the fact that Moratinos did not meet with dissidents in Cuba, Rice said she was concerned "that they get the right message, which is that the free world stands with them and is not prepared to tolerate an anti-democratic transition in Cuba."

"This Socialist government has no problem in talking to the dissidents," responded Moratinos. "I would ask you, 'Who has seen more of the dissidents?' "

Spain has diplomatic ties with Cuba; the United States doesn't.

"I expect that the issue on Cuba is going to continue to be an issue between us," Rice said on her first visit to Spain as secretary of state.

The president of the Cuban National Assembly on Friday told CNN that Castro is "practically ... fully recovered," although his rehabilitation continues.

"The worst moments are behind him at this moment," Ricardo Alarcon said on CNN's "The Situation Room."

Alarcon said under Raul Castro's leadership "everything went down here very smoothly, as it was supposed to be according to our law and constitution."

In response to Rice's call for a democratic transition, Alarcon said, "I wish that some day there will be a democratic transition in the United States, that there will be a regime change in your country, a change from war to peace, a change from arrogance, and for this kind of interfering in everybody's affairs, and looking back a little bit at home and ... facing the real problems that Americans have."

Rice: Venezuela should respect sovereignty of its neighbors
Rice also addressed what she considers an increasingly anti-democracy attitude in Venezuela.

Relations between Washington and Madrid have been frosty since Jose Zapatero ousted Bush ally Jose Asnar and the newly elected prime minister hastily withdrew Spanish troops from Iraq in 2004.

Things got so bad that Bush refused to take a congratulatory phone call from Zapatero after winning re-election.

However, Rice said that is now history.

"I want to underscore the degree to which the cooperation between Spain and the United States in counterterrorism, counter-narcotics and in military relations is very strong," she said.

Speaking of the nuclear standoff between Iran and the United States, Rice said, "I will tell you what will help to get us to the place that we don't face an unpalatable choice between having to do something on the military side or allowing Iran to have a nuclear weapon.

"That means to suspend their activities on enrichment and reprocessing. That means to enter negotiations on a package of incentives and a civil nuclear program that would be compliant with the international community's demands.

"But we aren't going to get to that favorable diplomatic outcome if we muddy the message toward the Iranians."