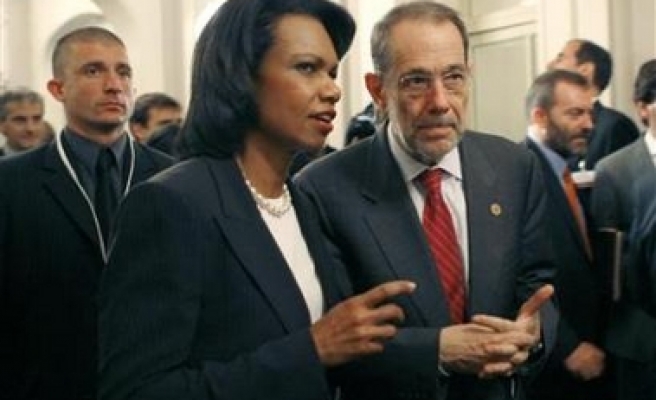 Secretary of State Condoleezza Rice issued a veiled warning to Syria on Tuesday, saying a Lebanon tribunal must be safe while it handles the murder of a Lebanese leader, a prominent critic of Syrian influence in Lebanon.

"One thing we'll be talking about is how to make certain these people can be secure in their work," Rice told reporters after discussing plans for the tribunal with Lebanese Prime Minister Fuad Saniora.

Asked how outsiders could safeguard the Lebanese tribunal members, Rice referred to the string of political killings since the 2005 assassination of then-Prime Minister Rafik Hariri. Supporters of Hariri blame Syria and its affiliates for the deaths.

"One thing is to make sure there is a spotlight on the problem of intimidation and the kinds of assassinations that have taken place in Lebanon," Rice said.

Rice's 90-minute breakfast meeting with Saniora closed out a two-day diplomatic trip to Paris. The U.S. and France have teamed up to pressure Syria to keep out of the affairs of its smaller neighbor, and to bolster the Western-backed Saniora's tenuous hold on power. Saniora also saw new French President Nicolas Sarkozy on Tuesday.

"I think he would be the first to say that given all that they're dealing with it's always difficult, and always in some sense fragile," Rice said. "But what's remarkable about this government is they keep responding to the challenges and overcoming them."

Collapse of Lebanon's government would be a major setback to a rare recent U.S. diplomatic success in the Middle East.

The United States was a behind-the-scenes player in forcing Syria to withdraw its army from Lebanon after Hariri's killing, and backed the nearly unblemished elections that brought Saniora to power.