Rigging fears ahead of Nigeria vote

A lorry-load of completed ballots for Saturday's presidential election have been seized by soldiers in north Nigeria, according to the opposition Action Congress. 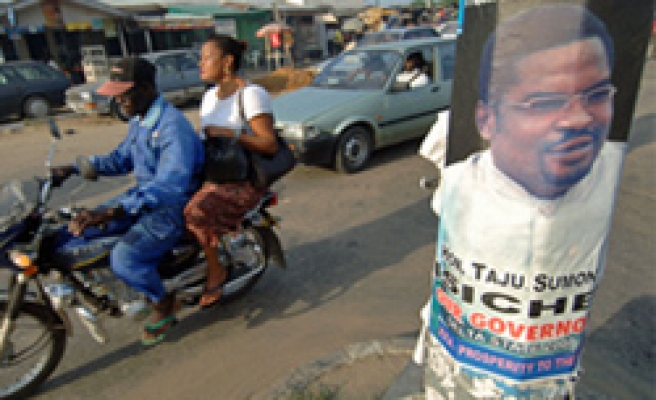 The claim came after Olusegun Obasanjo, Nigeria's outgoing president, called on Friday for a crackdown on possible vote-rigging during the poll.

"Soldiers in Kaduna have intercepted a truck-load of ballot papers, all already thumb-printed for the PDP [People's Democratic Party] ahead of Saturday's elections," Lai Mohammed of the Action Congress said.

The electoral commission said the claims could not be true because new ballot papers were still arriving from abroad after a last-minute change.

"The ballot papers are arriving as we speak so they couldn't have been captured by anybody," Maurice Iwu, electoral commissioner, said.

Widespread reports of electoral abuses during state elections on April 14, in which the ruling People's Democratic Party (PDP) won a landslide victory, prompted the opposition to declare that they had no confidence in the country's electoral commission.
In a nationwide broadcast, the outgoing president acknowledged that the elections for provincial governors and legislatures were flawed but asked international observers for understanding.

"The world is watching us and we cannot afford to disappoint ourselves, our friends and the world," Obasanjo said

He appealed to election observers to "understand some of our limitations" and "not to exaggerate the negative" in Nigeria, a country which has a history of violence and electoral fraud.

Obasanjo said efforts had been made to improve on the shortcomings of past elections.

At least 20 people were killed in violence surrounding the regional polls.

On Tuesday, a group of 18 opposition parties threatened to boycott the national election unless the government could guarantee "transparency and fairness".

But after three days of meetings, opposition parties were unable to reach a decision and the two main Nigerian opposition parties, the All Nigeria People's Party (ANPP) and the Action Congress (AC), announced separately on Thursday that they will take part in polls to find a new head of state and legislative assembly.

The US, the EU and rights groups have expressed serious reservations over the polls and called on Nigeria's government to take immediate action to prevent electoral misconduct.

The election to choose a successor to Obasanjo is being billed as the first civilian-to-civilian handover since the world's sixth biggest oil exporter won independence from Britain in 1960.
Obasanjo admitted that the conduct of last week's election was "marred", but said electoral malpractice including "massive rigging" which has characterised past elections was on the decline.

"Let us continue to improve on the structure and the house rather than pull it down because it is leaking in part," he said.

"I call on INEC [Independent National Electoral Commission] do everything possible to strengthen the integrity of the process, the system and the outcome.

"There is no perfect society but other societies identify their weaknesses and shortcomings and collectively make correction by strengthening the positive and eliminating the negative."

He also urged aggrieved candidates and their supporters to "explore all avenues for seeking redress rather than taking to jungle justice and running down the totality of our country and all it stands for."