Rising acidification of the ocean could reduce fertilisation of marine invertebrates and might eventually wipe out colonies of sea urchins, lobsters, mussels and oysters, according to a study. 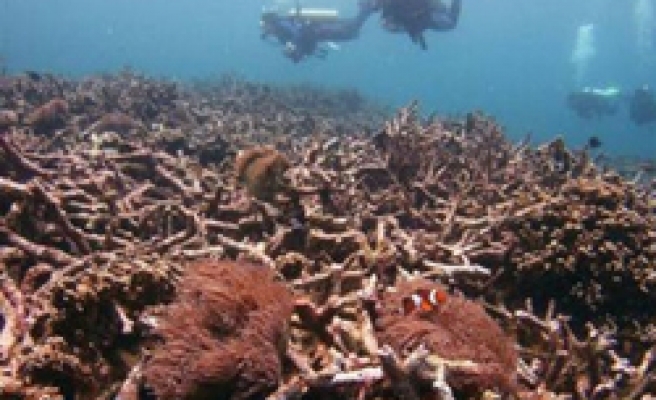 Scientists knew that ocean acidification was eating away at the shells of marine animals, but the new study has found that rising acidity hindered marine sperm from swimming to and fertilising eggs in the ocean.

Climate change and the subsequent acidification of the world's oceans will significantly reduce the successful fertilisation of certain marine species by the year 2100, said the report by Australian and Swedish scientists.

"If you look at projected rates (of acidity) for the year 2100, we are finding a 25 percent reduction in fertilisation," lead-scientist Jane Williamson from Macquarie University told Reuters on Friday.

"We were completely surprised because people had been looking at the effect of acidification on calcified structures of marine animals, but there was no evidence to suggest it was affecting non-calcified structures, like a sperm or an egg," she said.

The study of sea urchins around southeast Australia found a link between increased ocean acidity and a reduction in swimming speed and motility of sea urchin sperm.

The researchers measured sperm swimming speed, sperm motility, fertilisation success and larval developmental success in sea urchins in normal seawater with a pH 8.1 and also in water with a pH 7.7, which is projected to be the level of acidification by 2100.

The experiment found that in water with acidity at 7.7, the sperm swam much more slowly and began failing to meet the eggs.

Fertilisation fell by 25 percent and in almost 26 percent of cases where eggs were fertilised they did not survive to develop into larvae, said the study published in "Current Biology".

"It is widely believed that seawater is chemically well-buffered, but these results show that the acidification process already well underway may threaten the viability of many marine species," Williamson said.

She said acidity levels of 7.7 were already occurring in patches of ocean off the west coast of the United States.

She said that when acidification rose to 7.4, which is projected by 2300, sea urchins failed to fertilise eggs and died.

"The paper has looked at the projected rates within the next 80 years, but we have actually looked at higher acidification values and we have had mortality of the animals," she said.

"What we have now is evidence that the world's marine life is far more sensitive to ocean acidification than first suspected, and that means our oceans may be very different places in the not-too-distant future," Williamson said.