The risk of a human influenza pandemic remains real and is probably growing as the bird flu virus becomes entrenched in poultry in more countries, health officials warned on Tuesday. 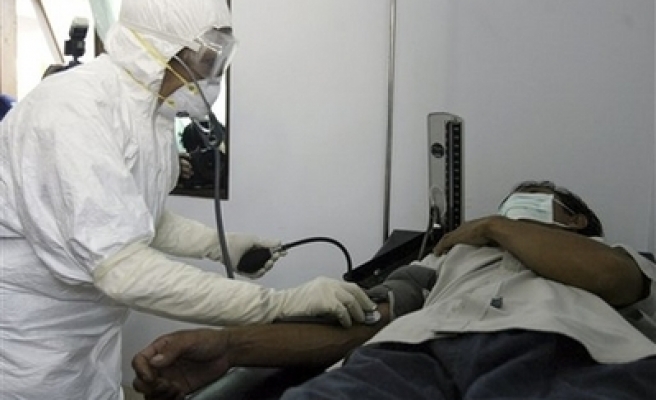 Some 150 experts are attending a meeting hosted by the World Health Organisation (WHO) to update its guidance to countries on how to boost their defences against a deadly global epidemic.

The H5N1 avian flu virus has infected flocks in much of Asia, Africa and parts of Europe. Experts fear it could mutate into a form that passes easily from person to person, sparking an influenza pandemic that could kill millions.

"The risk of a pandemic remains and is probably expanding," said Dr. Supamit Chunsuttiwat, a disease control expert at Thailand's health ministry who is chairing the four-day meeting.

Supamit noted the highly pathogenic H5N1 virus persisted on three continents and had caused human cases in Indonesia, Egypt and China this year.

"We are concerned that the spread through migratory birds hasn't stopped. Once the virus is established in birds, it is difficult to get rid of the virus and the risk (to humans) remains unless countries develop good control of transmission in birds," he told Reuters. The avian flu virus rarely infects people, but there have been 382 human cases worldwide since 2003, 241 of them fatal, according to the WHO, a United Nations agency.

Keiji Fukuda, coordinator of WHO's global influenza programme, told the talks: "We can't delude ourselves about the threat of pandemic influenza -- it has not diminished."

The timing of a pandemic "remains speculative," he said.

A pandemic could shut down businesses and schools and overwhelm healthcare systems, particularly in poor countries.

Infected people can shed the virus before symptoms appear, and this increases the risk of international spread through asymptomatic air travellers, the WHO says.

Most countries have drawn up pandemic plans, but the level of preparedness varies. The WHO aims to revise its 2005 guidance to its 193 member states by year-end.

"We are going to improve our guidance and give people and countries better tools to deal with," Fukuda said. "Pandemic preparedness is not just a health sector effort, it is something that requires the whole of society's perspective."

The WHO has set up two global stockpiles of the antiviral Tamiflu, containing 5 million treatment courses donated by the Swiss drugmaker Roche for use in a pandemic.

It is also developing a vaccine stockpile which -- when a vaccine has been produced -- should initially contain 150 million doses, Fukuda said.

At least 16 companies are working on vaccines to prevent bird flu infection in people, including GlaxoSmithKline and Sanofi-Aventis.

"Some are very close to regulatory approval. These are the newer generation vaccines which use less antigen and contain adjuvant but still stimulate an immune response," Fukuda said.

Antigens are substances like toxins, viruses and bacteria that stimulate the production of antibodies. They can be difficult to culture, and scientists have been trying to fix that by using adjuvants, which boost a vaccine's effectiveness.

Large-scale commercial production of a vaccine will not start until a pandemic virus has emerged, because the vaccine must closely match the strain.

The WHO uses six phases of pandemic alert to gauge levels of threat. The world is currently in phase 3, meaning that a new influenza virus sub-type is causing disease in humans but is not yet spreading efficiently.

"The risk is as great as it has ever been. We hope to send out a very clear message that this effort needs to continue and the threat has not gone away," Fukuda told Reuters.