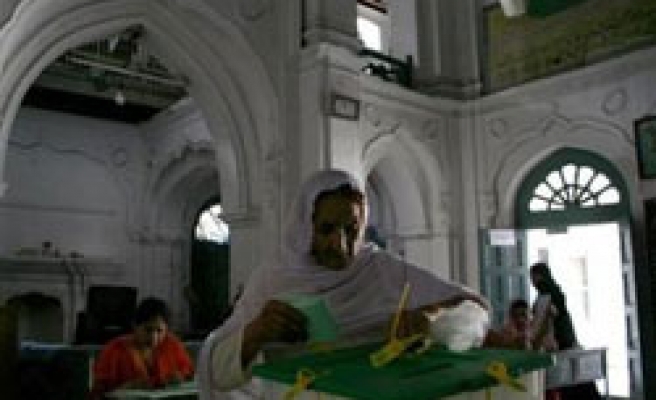 Voting in one National Assembly seat, where former prime minister Nawaz Sharif planned to stand, was postponed pending a Supreme Court decision on his eligibility.

Violence erupted in at least three constituencies, media reported, with the worst of it in Punjab province where gunmen exchanged fire.

"Some armed men virtually tried to stop polling. We arrested four of them and seized some weapons," police office Mohammad Kamran Khan told reporters outside a polling station in southern Punjab.

The by-elections will not effect the outcome of a Feb. 18 general election in which slain former prime minister Benazir Bhutto's party won 123 seats in the 342-seat National Assembly and Sharif's party came second with 91.

The main party that backs President Pervez Musharraf came a poor third with 54 seats, undermining the standing of the unpopular former army chief and U.S. ally.

Bhutto's widower and political successor, Asif Ali Zardari, has formed a coalition with Sharif but their alliance has been strained by differences over the fate of judges Musharraf dismissed last year and over how to handle the president.

Sharif, the prime minister then army chief Musharraf ousted in a 1999 coup, wants to see Musharraf impeached and put on trial for treason.

Zardari has been less confrontational, hoping Musharraf will step down before too long without the risk of turmoil.

Sharif had been expected to win a seat in parliament from a Lahore constituency until a court in the eastern city ruled on Monday he was ineligible to stand, mainly on the basis of an old criminal conviction that Sharif says was politically motivated.

The Supreme Court is due to hold its next hearing into the case on Monday.