Robots to look for life in Arctic Ocean

The Gakkel Ridge, encased under the frozen Arctic Ocean, is steep and rocky, and scientists suspect its remote location hosts an array of undiscovered life. 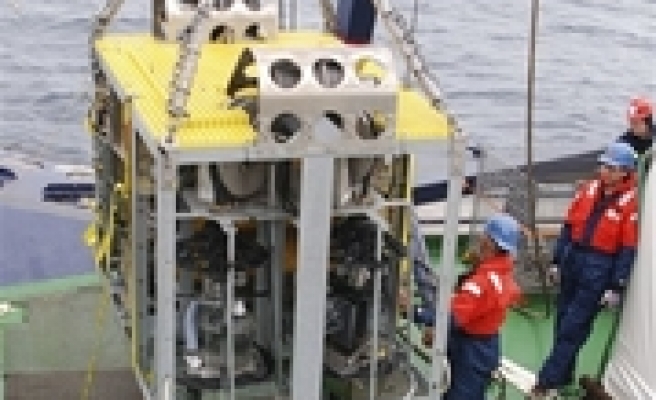 Researchers hope newly developed robots will give them their first look at the mysterious ridge located between Greenland and Siberia.

Scientists from the Woods Hole Oceanographic Institution on Cape Cod plan to begin a 40-day expedition of the ridge on July 1. They plan to use the robots to navigate and map its terrain and sample any life found near a series of underwater hot springs.

Tim Shank, lead biologist on the international expedition, said researchers have no idea what new life at the ridge might be like.

"I almost think it's like going to Australia for the first time, knowing it's there, but not knowing what lives there," he said.

The Gakkel Ridge marks a 1,100-mile stretch from north of Greenland toward Siberia, where the North American and Eurasian tectonic plates continuously move away from each other.

Scientists believe new life could be discovered there because of hot springs that are created at such tectonic boundaries when ocean water comes into contact with hot magma rising from the earth's mantle.

The organisms known to exist in the Arctic basin, where the Gakkel is located, may have evolved in a unique fashion because they were mostly isolated from the life in the deep waters of other oceans for all but the last 25 million years, said Robert Reves-Sohn, the expedition's lead scientist.

The job of reaching any new organisms at the ridge falls to scientists operating three new robotic vehicles, two of which are designed to navigate untethered under the ice.

The two robots, named Puma and Jaguar, cost about $450,000 each and received significant funding from NASA because their mission is similar to what scientists hope to do in a future exploration under the ice of one of Jupiter's moons, Europa.

The robots are built to descend to about 5,000 meters and work 5 to 6 meters off the bottom, photographing and removing samples, said Hanumant Singh, the project's chief engineer.

The advances are no guarantee of success, however.

The hot springs are difficult to find in far less challenging conditions and the margin for error is thin, since the robots cannot surface through the ice and be retrieved if there are problems.

Singh said the excitement of finding new organisms and understanding the geology in the Arctic outweighs any risks to the robots.

"Even though we know there's a strong probability, or there's a reasonable probability of losing a vehicle, it's still worth it," he said.