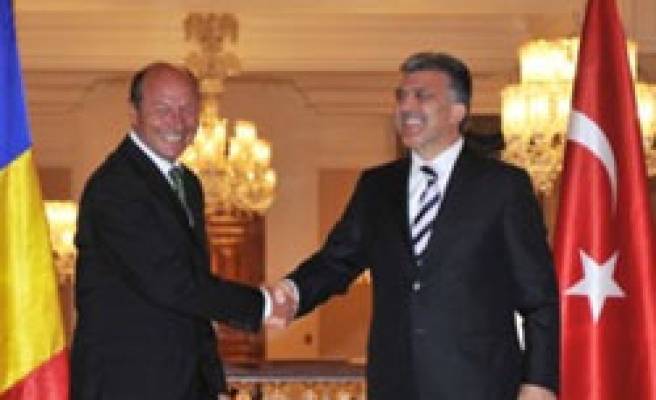 Romanian President Traian Basescu said Thursday he was pleased to see that Turkey and Romania shared the same views on maintaining territorial integrity of Georgia.

During the conference, Gul said that his comprehensive talks with Basescu contributed remarkably to the improvement of bilateral relations between Turkey and Romania, as well as regional cooperation.

Basescu said Turkish and Romanian officials also discussed energy projects despite recent conflict in Georgia, adding that Nabucco and other projects could continue.

Commenting on the latest developments in Georgia as well, Gul said he had a similar opinion with Basescu regarding the establishment of peace, stability and prosperity in the South Caucasus.

"It is promising that the clashes have reached an end, a cease-fire has been provided and Russia has started to withdraw its troops in accordance with it," Gul said.

Upon a question on what he thought about the possible involvement of U.S. forces in the process of re-balancing the powers in the Black Sea region, Gul said, "I do not think that a new arrangement is needed in the region".

"As countries with coasts on the Black Sea, we are determined to protect the region's peace and stability," Gul said.


Gul said the value of the investments conducted by Turkish businessmen in Romania reached 2 billion USD, adding that the total trade volume of the two countries was almost 7 billion USD as of the end of 2007.

Following the joint press conference, Gul hosted a dinner in honor of his Romanian counterpart.