Romanians have overwhelmingly rejected an attempt to impeach the country's reform-minded president, with near-complete results showing about three-fourths of voters backing Traian Basescu. 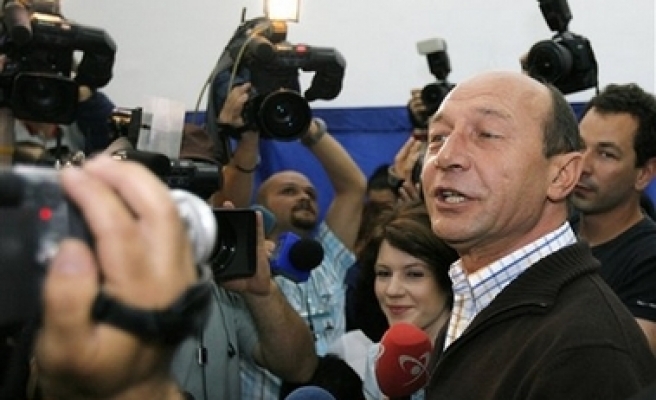 Romanians have overwhelmingly rejected an attempt to impeach the country's reform-minded president, with near-complete results showing about three-fourths of voters backing Traian Basescu.

Romanians voted on Saturday in a referendum to decide on Basescu's fate, after parliament suspended him last month, accusing him of abuse of power.

With more than 90 per cent of the ballots counted on Sunday, 74.3 per cent of voters said "no", while 24.9 per cent supported impeachment, Dumitru Gheorghe, head of the central electoral commission, said.

Turnout was just under 44 per cent, he said.

The results mean Basescu - locked for months in a political standoff with the prime minister and members of parliament over his aggressive attempts at reform - can return to office once the results are validated.

Basescu, celebrating his victory, said the referendum showed that the public backs his push to enact change in the new EU nation.

"Romanians want justice, and we have an obligation to give them what they want," he said. "I appeal to parliament to co-operate in taking into account today's vote."

Calin Popescu Tariceanu, the prime minister and a one-time ally who has publicly clashed with Basescu in recent weeks, said he would work with Basescu, saying Romanians had given Basescu "a second chance".

"I respect this decision, and will act in a spirit of collaboration with the president."

About 1,000 Basescu supporters celebrated late on Saturday in central Bucharest, waving orange flags and banners, and chanting the president's name while calling for Tariceanu's resignation.

Thousands of others also celebrated in Cluj, Timisoara, Constanta and Brasov.

Basescu, joining the celebrations, vowed to do "everything possible" to modernise the country.

"I will not negotiate the people's hopes for a modern country, a new Romania that is different than the one which emerged during the transition" from communism, he said.

Basescu has been a strong proponent of reform, guiding the country as it joined the European Union this year.

However, he has clashed openly on policy with his prime minister, with both waging highly publicised verbal attacks in the media.

Last month, MPs led by the left-wing opposition Social Democratic party voted to suspend him from office and to put the vote on his impeachment to the people.
Last Mod: 21 Mayıs 2007, 09:57
Add Comment