Royal and Sarkozy in French runoff

Nicolas Sarkozy and Segolene Royal heading into the second round of France's presidential election on May 6. 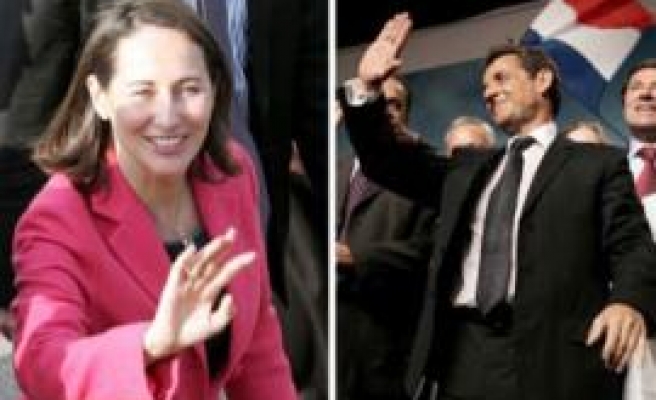 Three polling firms put Sarkozy's support at between 52 and 54 per cent, against 46 and 48 per cent for Royal.

Francois Bayrou failed to provide a significant challenge to the traditional left-right split, garnering 18.5 per cent, while Jean-Marie Le Pen, the far-right candidate, managed less than 11 per cent, failing to repeat his shock entry into the second round in 2002.

None of the eight other candidates won more than five per cent of the vote.

About 84 per cent of Frances 44.5 million registered voters turned out to choose a successor to Jacques Chirac, who steps down next month after leading the country for 12 years.

"The French people expressed their desire to let no one else speak for them by putting me first in this first round," Sarkozy told activists at his UMP party headquarters after hearing of his victory.

"By putting Mrs Royal in second place, they clearly marked their wish to go to the end of the debate between two ideas of the nation, two projects for society, two value systems, two concepts of politics."
I want to unite France behind a new French dream ... where no one is left behind," he added.

Sarkozy, the son of a Hungarian immigrant, will probably have to soften his image ahead of the second round after his proposed crackdowns on illegal immigration and crime provoked fears he would divide rather than unite the nation.


Royal said her success was not a personal victory but a "major responsibility".

In 15 days, France will choose its destiny and a new face to represent it. I launch an appeal to all of you who want a France of respect, because we know that there is no liberty without justice; there is no economic increase without social improvement.


"We will have a clear choice to make on the 6th of May between two very different paths."

Royal, an army officer's daughter who is hoping to become France's first female president, is also expected to make a move towards the centre to pick up voters who backed the other candidates.

She has presented herself as a nurturing mother figure and has proposed an economic programme that would keep France's generous welfare system intact.

Reaching for the centre

Philippe Chatenay, a journalist from Paris-based weekly Marianne, told Al Jazeera that "it would be the candidate who could most soften his or her rough edges that will make it through to the presidency".
"I think both Ms Royal and Mr Sarkozy must now reach out to the centre, and it will be the one that can do it best who I think will win the Elysee [palace]."

The destination of Bayrou and Le Pen's first round votes will have a significant bearing on the second round result.

Centrist candidate Bayrou refused to say if he would urge his backers to vote for a particular candidate in the second round and a member of his party said he would "listen" to what the candidates said first.

Le Pen, whose poor showing could spell the end of his political career after five presidential elections, said he would give instructions to his supporters during a speech on May 1.

"I must have made an error in judgement ... I thought the French were unhappy," the National Front leader said as unofficial results placed him fourth.

"The French are very happy and the proof is that they have just re-elected - my goodness, with a very comfortable lead and even a little more - the parties that have been in power and who are responsible for the situation in France."