Russia announced a deal to dramatically increase the amount of natural gas it moves from Central Asia to Europe, a key victory in a growing rivalry with the West for the region's vast energy resources. 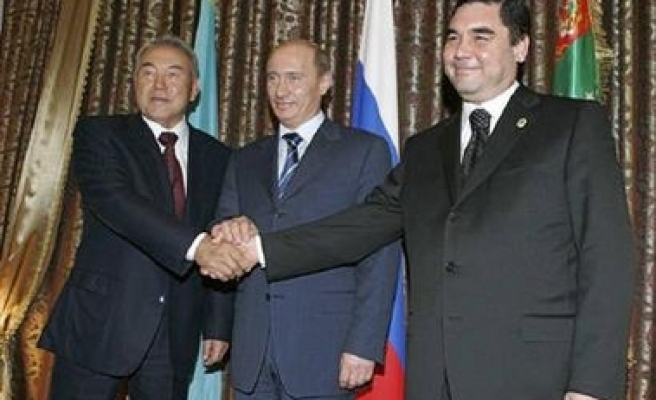 Russia announced a deal Saturday to dramatically increase the amount of natural gas it moves from Central Asia to Europe, a key victory in a growing rivalry with the West for the region's vast energy resources.

Russian President Vladimir Putin and the leaders of the region's main energy producers, Turkmenistan and Kazakhstan, agreed to build a pipeline running from Turkmenistan through Kazakhstan and into Russia's network of pipelines to Europe.

The three presidents also said that, with Uzbekistan, they would revamp the entire Soviet-built pipeline network that carries Central Asian gas to Russia.

Along with two oil deals, the new gas agreements are a blow to U.S. and European efforts to construct oil and gas pipelines from Central Asia that would cross under the Caspian Sea, avoiding Russia, and connect to Europe through Azerbaijan and Turkey.

They mean that Russia would control the bulk of Central Asian energy exports, boosting its role as a major supplier of oil and gas to Europe and strengthening Western fears that Moscow could use its energy clout for political purposes.

Russia supplies a quarter of Europe's gas and is its second-biggest supplier of oil. European fears of excessive energy reliance grew after Moscow briefly halted gas supplies to several ex-Soviet neighbors. The shutdowns in 2006 and 2007 took enough gas out of the pipeline network to reduce deliveries to the EU.

Putin sought to assuage such fears, saying in the Turkmen city of Turkmenbashi on the Caspian shore: "We take our role in the global energy sector very responsibly." But when asked whether others could join the new pipeline project, he answered with a curt, "No."

"It's enough to have three countries," Putin said.

The competition among Russia, the West and China for influence over Central Asia, has been called a new "Great Game," after the imperial rivalry of 19th century Britain and Russia in the region.

The new rivalry accelerated after the death last year of Turkmen President Saparmurat Niyazov, who kept both Russia and the West at arm's length and signed deals to build pipelines to China.

But Putin appears to have given Russia a significant advantage over China and the West in any future deal for gas development in Turkmenistan, he said.

"It's a fundamentally important deal for Russia, but could also have a long term effect on U.S. and Chinese hopes of securing Central Asian gas supplies for themselves," he said.

The new pipeline's cost was not announced, but the ITAR-Tass news agency cited a 2003 estimate putting it at around $1 billion. Other details, such as how the costs would be split among the three nations, were also unavailable.

The presidents ordered their governments to sign an agreement outlining the deal's specifics by Sept. 1. Putin said construction would begin in mid-2008.

Russia, the world's No. 1 natural gas exporter, would further strengthen its clout by maintaining a monopoly on movement of Turkmen and Kazakh exports to Europe.

Moscow controls the only existing export routes for gas from Turkmenistan — the second-biggest gas producer in the former Soviet Union after Russia — along with the main pipeline for Kazakh oil exports.

The EU has long pushed Russia to ratify an energy pact that would give independent producers access to its export pipelines and oil and gas fields, but Putin has bluntly rejected the demand, saying it was against Russia's interests.

There have been no independent audits of Turkmenistan's gas reserves, but the
CIA estimated that it has more than two trillion cubic meters of proven natural gas reserves.