General Staff said that Russian troops had begun their pullout from the conflict zone, though there was no independent verification of this. 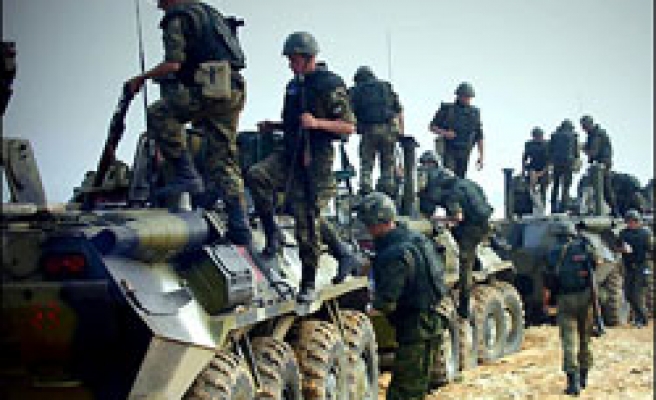 Moscow said it had begun a military pullback from Georgia on Monday and President Dmitry Medvedev promised a "crushing response" to any future attack on Russian citizens.

A senior US official said there were no signs yet that the Russian pullout had begun. The United States has urged Russia to pull its troops swiftly out in the hope of a quick end to a conflict that has raised tensions between Moscow and Washington.

In a show of defiance, Medvedev said: "If anyone thinks that they can kill our citizens and escape unpunished, we will never allow this. If anyone tries this again, we will come out with a crushing response. We have all the necessary resources, political, economic and military," a stern-looking Medvedev told World War II veterans in the Russian city of Kursk.

In Moscow, the Russian General Staff told a daily briefing that Russian troops had begun their pullout from the conflict zone, though there was no independent verification of this.

"I can say for certain when the New Year will come but I cannot give an exact date for the withdrawal of our troops from the conflict area yet," said Col.-General Anatoly Nogovitsyn. "I can only say that we will not be leaving as fast as we came." There was no evidence of that so far, a senior US official said in Brussels.

"Let's hope that this is a technical slowness in getting implemented ... let's see the Russians begin to pull back. That's what we'd like to see, but we haven't seen it yet," the official said, speaking on condition of anonymity. Georgia accused the Kremlin's forces of blowing up its weapons and ammunition dumps near the western town of Senaki -- modernized to NATO standards -- as they withdrew.

"They are destroying everything and then pulling out of these places," Interior Ministry official Shota Utiashvili said. "If they call this a pullout, then I do not understand the meaning of the word."

A Reuters journalist in Senaki said he heard three loud explosions but was not allowed to enter the area. He said a Russian official had given advance warning that there would be controlled explosions.

Explosions were also heard in the Gori area of central Georgia, though there were no reports of fighting. Russia mounted its biggest military deployment outside its borders since the 1991 collapse of the Soviet Union after Georgia sent a force on Aug. 7-8 to try to recapture the rebel, Moscow-backed province of South Ossetia. The conflict has rattled the West, which draws oil and gas through pipelines across Georgian territory from the Caspian region -- a route favored because it bypasses Russia.

The European Union and the United States, wary of a drift back into conflict if there are delays, are pressing Moscow to finish the pullout quickly. They want international monitors on the ground but have not yet made the necessary arrangements.

Russian commanders accused Georgia of wrecking a planned prisoner exchange and continuing to mount isolated sniper and sabotage attacks on its positions.

"We are aware that the Georgian side can undertake provocative actions at any moment against our troops as well as the civilians," Nogovitsyn said. "We can't rule out the use of Slavic-looking people, dressed like Russian military, for provocations and sabotage."

The United Nations said a first aid convoy managed to enter Gori on Sunday and that while buildings did not appear to be badly damaged, there were "clear signs of massive looting". The International Red Cross complained that its president, Jakob Kellenberger, had not been given access to South Ossetia for a fact-finding mission. It said it was seeking urgent clarification from Moscow to resolve the situation.

Georgian President Mikheil Saakashvili again attacked Russia in a television address for "senselessly looting, robbing, stealing, destroying and blowing things up" but said that after Moscow's occupation ended, there should be talks.

"I appeal to you that after your armed forces leave Georgian territory, to start serious thinking and discussions about further negotiations, a further search for ways (to conduct) relations in order not to sow discord between our countries for good," Saakashvili said in the broadcast.

Russian leaders have condemned Saakashvili as a dangerous "maniac" and have suggested privately that there is no need to speak to him because his own people will topple him before long.

The 10-day confrontation around South Ossetia has killed more than 170 Georgians, dealt a blow to the Georgian military, damaged the country's economy, disrupted road and rail links and drew Western criticism of Saakashvili's handling of the crisis.