Georgian PM Gurgenidze said he would remain "prepared for everything" until Moscow signed a formal peace deal. 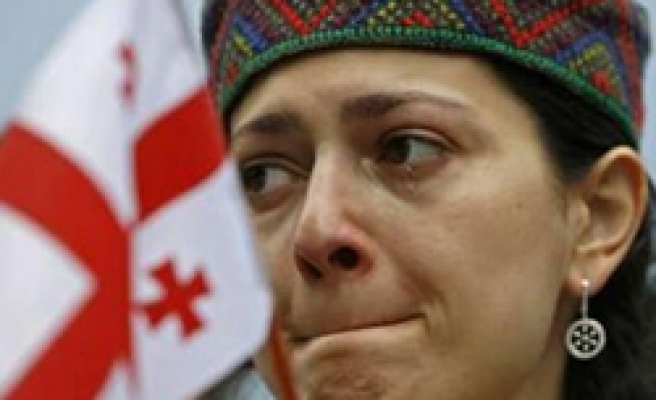 Russian President Dmitry Medvedev ordered a halt to military operations in Georgia on Tuesday, saying Moscow had achieved its objectives by punishing Tbilisi.

"The aim of the operation has been achieved," Medvedev said in televised remarks. "...The aggressor has been punished and has suffered very considerable losses."

Close U.S. ally Georgia entered conflict with Russia last week after launching an offensive to retake the pro-Russian region of South Ossetia, which broke away from Georgian rule in 1992. Moscow responded with a huge counter-offensive.

Georgian Prime Minister Lado Gurgenidze told Reuters he wanted to see more evidence of a Russian ceasefire and would remain "prepared for everything" until Moscow signed a formal peace deal. The news broke just before Sarkozy saw Medvedev at the Kremlin to discuss an international plan to halt the five-day- old war, which has rattled world oil markets and unnerved the West.

"I think what you have confirmed here is good news," Sarkozy said. "A ceasefire now has to take shape. We must draw up a rapid calendar so that each side can go back to the positions of before the crisis."

Medvedev set two conditions for a full settlement of the conflict: Georgian troops had to return to their initial positions and be partly demilitarised, and a binding agreement had to be signed on the non-use of force.

It was not immediately clear whether Georgia would agree to these conditions.

Russian Foreign Minister Sergei Lavrov earlier said Moscow could not agree to a peace plan which included Georgians in a future peacekeeping force because they had attacked Russian colleagues during Tbilisi's push to recapture breakaway South Ossetia last week.

Lavrov denied Georgian and U.S. claims that Moscow wanted to overthrow Saakashvili, though he added: "It would be better if he went".

In Georgia, a series of explosions in the town of Gori on Tuesday killed at least five civilians, a Reuters correspondent said. An analysis of television footage suggested the blasts were caused by mortars, although it was not clear who fired.

Broadcaster RTL later said a Dutch cameraman was among the dead and a correspondent wounded.

Putting further pressure on Saakashvili, separatists in the Black Sea region of Abkhazia, west of the main war theatre, launched a push early on Tuesday to drive Georgian forces out of the Kodori Gorge -- the only area of that province under Georgian control.

"The operation to liberate Kodori Gorge has started," Abkhazia's self-styled foreign minister Sergei Shamba said. "Our troops are making advances. We are hoping for success."

Bush told Moscow to end its military action and accept a peace agreement, saying its moves had jeopardised relations with the United States and Europe.

Georgia hosts an important pipeline carrying oil from the Caspian to the West and the fighting has unsettled oil markets, though the pipeline itself has not been touched by the conflict.

Russian top military officials have insisted that they have never targeted oil pipelines, though Georgia has accused them of doing so.

The war has alarmed investors in Russia, hitting the rouble and Russian stocks and has raised fears of a wider conflagration in the volatile region bordering Iran, Turkey and Russia.

Saakashvili said earlier he had agreed to a plan proposed by French Foreign Minister Bernard Kouchner under which hostilities would end, a mixed peacekeeping force would be deployed -- replacing the purely Russian one -- and troops would return to pre-conflict positions.

Kouchner was in Georgia on Monday before flying to Moscow for meetings on Tuesday ahead of Sarkozy's arrival.

Russia says 1,600 South Ossetian civilians have been killed in the fighting and thousands are homeless but these figures have not been independently verified. Georgia has reported close to 200 killed and hundreds of wounded.