Russia pulling out of Gori as US flies aid into Georgia

U.S. Secretary of State Condoleezza Rice was set to hold talks on Thursday with French President Nicolas Sarkozy before heading to Tbilisi. 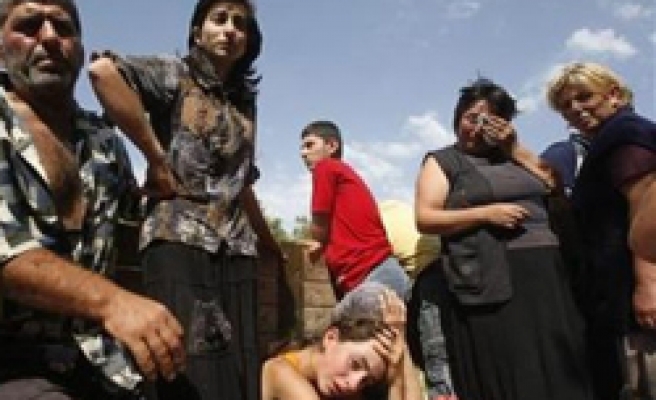 Georgia's Interior Ministry says Russian troops have begun pulling out of the city of Gori.

Russian troops entered Gori on Wednesday. The city is about 15 miles south of South Ossetia, the separatist Georgian region where Russian and Georgian forces fought a brutal five-day battle.

The entry into Gori came hours after both sides signed a cease-fire agreement that called for their forces to be pulled back to the positions they held before the fighting started a week ago.

U.S. military planes began delivering aid to Georgia as Washington stepped up support for a shaky ceasefire with Russian troops around the breakaway region of South Ossetia.

Russia said on Thursday it will soon pull out from Gori, a town 60 km (35 miles) east of the capital Tbilisi, just outside South Ossetia and which contols the key road between eastern and western Georgia.

U.S. Secretary of State Condoleezza Rice was set to hold talks on Thursday with French President Nicolas Sarkozy before heading to Tbilisi.

Her trip comes six days into a conflict that has shifted from artillery, tank and gun battles at the weekend to increasingly sharp diplomatic and political exchanges out of Washington, Moscow and Tbilisi.

"The United States of America stands with the democratically-elected government of Georgia. We insist that the sovereignty and territorial integrity of Georgia be respected," Bush told reporters at the White House.

Moscow has denied violating a ceasefire and rejected claims its troops and armour had advanced on Tbilisi or looted Gori.

Speaking in Moscow, Foreign Minister Sergei Lavrov, told by Rice that Russian servicemen were failing to prevent looting by irregular militias in Gori, said such actions would not be tolerated.

"I said from the very beginning that if any such facts prove true, we will react in the most serious way...The peaceful population should be protected. We are investigating all these reports and will not allow any such actions," Lavrov said.

Russian President Dmitry Medvedev has urged France, which is mediating in the conflict, to encourage Tbilisi to sign a binding agreement not to attack its separarist regions.

Human Rights Watch, a U.S.-based organisation with staff in Georgia, said its onsite researchers had witnessed looting of ethnic Georgian villages in South Ossetia, the rebel province at the heart of the current conflict.

A top Russian general said overnight, Gori and the surrounding area will soon be handed over to Georgian forces.

"For another two days Russian troops will stay in the region to carry out procedures of handing over control functions to Georgian law-enforcement bodies after which they will leave," Major-General Vyacheslav Borisov told Russian news agencies.

"All buildings are in normal shape, the town is supplied with water and electricity," he added inviting Georgians who fled Gori to return to their homes.

Lavrov said the United States needed to choose between partnership with Moscow or the Georgian leadership, which he characterised as a "virtual project" of the Bush administration.

"Georgia is a democratic government in the Caucasus that has elected leaders. To call it a project of anyplace, of anybody, perhaps belies more about what Russia thinks about its neighbours that what it thinks about U.S. policy," Rice said.

Bush, who spoke with Georgian President Mikheil Saakashvili earlier in the day, ordered humanitarian supplies to be delivered to Tbilisi on U.S. military aircraft.

A U.S. C-17 military aircraft carrying supplies arrived in Georgia and a second flight was planned for Thursday.

Bush said the United States expected Russia to allow humanitarian supplies into Georgia and ensure that all lines of communication and transport remain open.

Speaking in Tbilisi, Saakashvili said Bush's pledge meant Georgian ports and airports would be taken under U.S. military control -- a claim swiftly denied by the Pentagon.

The fighting in the Caucasus, an important transit for Caspian oil, has unnerved the United States, NATO and the European Union and rattled investors.

Russia says 1,600 civilians died when Georgia attacked South Ossetia, though the figure has not been independently verified. Moscow's general Staff says it lost 74 soldiers in the fighting, with 171 wounded and 19 missing.

Tbilisi puts deaths on its side at over 175, with hundreds injured. That figure does not include South Ossetia.