Russia is extremely sensitive to what the Kremlin says is a rewriting of history about the Soviet Union's role in World War Two, which Russians call the Great Patriotic War. 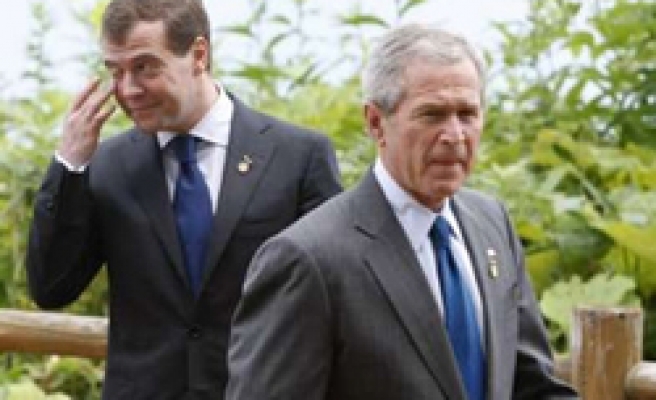 The Foreign Ministry said Bush had coupled Nazi fascism and Soviet communism as "a single evil" and thus "hurt the hearts" of World War Two veterans in Russia and allied countries, including the United States.

"While condemning the abuse of power and unjustified severity of the Soviet regime's internal policies, we nevertheless can neither treat indifferently attempts to equate Communism and Nazism nor agree that they were inspired by the same ideas and aims," the ministry said in a statement to mark Captive Nations Week, an annual event.

Bush signed a proclamation published on July 18 in which he called on the American people to reaffirm their commitment to advance democracy and defend liberty around the world.

"In the 20th century, the evils of Soviet communism and Nazi fascism were defeated and freedom spread around the world as new democracies emerged," the proclamation said, according to a copy posted on the White House's www.whitehouse.gov Web site.

Russia's foreign ministry said Bush's comments were part of an attempt to rewrite history in the United States.

"Such assessments simply feed the efforts of those, who for political and selfish ends are striving to falsify the facts and rewrite history," the ministry said.

Russia is extremely sensitive to what the Kremlin says is a rewriting of history about the Soviet Union's role in World War Two, which Russians call the Great Patriotic War.

Russians see the victory over Germany as a defining moment in their history and are immensely proud that the Red Army drove German forces out of eastern Europe. The war cost 20 million Soviet lives.

But many in eastern Europe associate the arrival of Red Army soldiers with the start of Soviet rule, during which thousands of people were arrested and sent to camps, and their governments were directed from Moscow.