Georgia and Russia are both Orthodox Christian nations, although they have separate national churches. 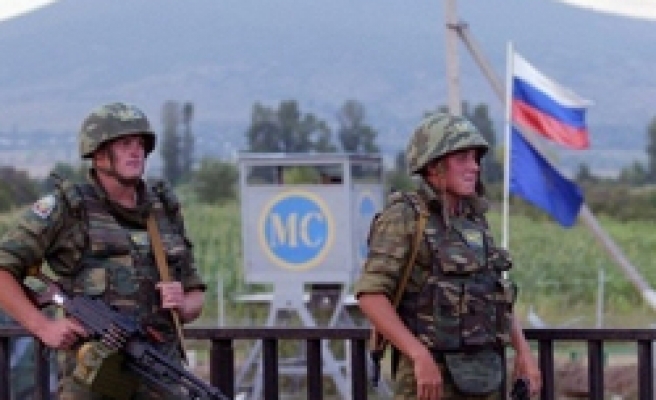 Russian troops took most of the capital of the separatist Georgian region of South Ossetia on Sunday after a three-day battle but the United States condemned Moscow's "dangerous and disproportionate" action.

Russia poured troops and tanks across its southern border into tiny Georgia and bombed Georgian targets after Tbilisi attempted on Thursday evening to retake South Ossetia, a small pro-Russian province which broke away from Georgia in the 1990s.

The rapidly escalating crisis has alarmed the United States, Georgia's main ally, and unnerved investors in Russia, who sold stocks and the rouble heavily on Friday on concerns that the conflict could spiral.

Russian officials said they had taken control on Sunday of most of Tskhinvali, the South Ossetian capital, which has been devastated by intense fighting.

"As of today most of the city (Tskhinvali) is controlled by Russian peacekeeping forces,"Colonel-General Anatoly Nagovitsyn of the Russian General Staff, told an official briefing in Moscow.

Georgia confirmed it was pulling back its forces from the town. The secretary of Georgia's National Security Council, Kakha Lomaia, told reporters "military commanders have made their decision to pull back from Tskhinvali this morning".

Viewed from the town of Gori inside Georgian-controlled territory, Tskhinvali appeared to be quiet. A Reuters correspondent reported hearing only one burst of what sounded like artillery fire from near Tskhinvali.

A Georgian convoy of troops and artillery left South Ossetia through Ergneti, a village just inside Georgian-held territory south of Tskhinvali, but Lomaia said Georgian forces were still fighting inside South Ossetia and had not been defeated.

President George W. Bush's deputy national security adviser James Jeffrey told reporters in Beijing where the president was attending the Olympics that Moscow's actions could have a "significant long-term impact" on relations.

"We deplore the dangerous and disproportionate actions by Russian forces and we would be particularly troubled if these attacks are continuing now as the Georgians are pulling back," he said.

Russian officials said the death toll in fighting that began on Thursday stood at 2,000. Georgia said on Friday that it had lost up to 300 people killed, mainly civilians.

"It is my dearest hope that military action will stop immediately and that they will abstain, in the name of their common Christian inheritance, from further clashes and violence," the pontiff said in his Sunday Angelus address.

Georgia and Russia are both Orthodox Christian nations, although they have separate national churches.

Russian television showed what it said were pictures from Tskhinvali of burnt-out buildings, wounded civilians receiving medical treatment in dingy basements and crying mothers complaining of a lack of food and water.

"The Georgian tanks fired at everything they saw, including women and children," one male witness said after his evacuation over the border to the Russian region of North Ossetia.

A female evacuee clutching her two children said she feared the worst for her husband. "It's so difficult to be here and know my husband is still in South Ossetia, every moment I fear the worst will happen, she said.

In Geneva, the U.N. High Commissioner for Refugees Antonio Guterres expressed grave concern over the plight of thousands of civilians caught up in fighting in and around South Ossetia, a region of 70,000 people.

Underlining his paramount role in the Russian leadership, Prime Minister Vladimir Putin cut short his visit to the Beijing Olympics and flew on Saturday to a field hospital in North Ossetia, visiting wounded troops and evacuees, and denouncing what he termed Georgia's "crimes against its own people".

Medvedev, who has taken a back seat in the handling of the crisis, said little and looked uncomfortable as Putin expounded at length on the situation, detailing what needed to be done.

Potentially widening the conflict, the leader of Abkhazia, a second pro-Russian breakaway Georgian region, said on Sunday he had ordered 1,000 troops to push Georgian forces out of part of his territory and called up reservists.

Georgia quickly denounced what it termed "new aggression" prepared by Moscow in Abkhazia, a strip of land along the Black Sea coast which broke away from Georgian control at about the same time as South Ossetia.

In a statement, U.N. Secretary-General Ban Ki-moon said he was profoundly concerned over mounting tensions in Abkhazia.

Russia's navy also entered the conflict, deploying a small group of ships off Georgia's Black Sea coast. There was no official comment on their mission but the Interfax news agency said they would prevent weapons and military equipment reaching Georgia by sea.