Washington and Prague signed a deal on Tuesday to place a tracking radar in the Czech Republic as part of a missile shield system. 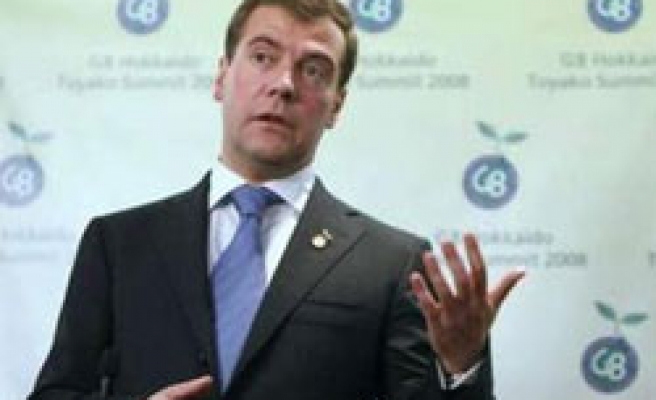 Russia will consider how to retaliate over a planned U.S. missile shield but wants to continue talks on the issue with Washington, President Dmitry Medvedev said on Wednesday.

Washington and Prague signed a deal on Tuesday to place a tracking radar in the Czech Republic as part of a missile shield system.

Russia is sensitive to any Western military build-up near its borders and says it considers the U.S. missile shield plans a direct threat to its security.

"We are extremely upset by this situation," Medvedev told a news conference on the northern Japanese island of Hokkaido, where he was attending a summit of the Group of Eight leaders.

"We will not be hysterical about this but we will think of retaliatory steps," he said, but did not specify what measures Russia might take.

Previous president Vladimir Putin proposed to Washington and NATO last year to set up a joint system of early warning to trace any potential launch from the volatile South. Moscow offered use of a radar station it hires in Azerbaijan.

"There has been no reaction," Medvedev said. "They are conducting sleepy talks with us and that means that the (U.S. shield) idea will be realised."

"It is completely obvious that, after the signing of the agreement, a new stage in implementing the idea of the missile shield has started," he added.

His comments followed a harshly worded statement by Russia's Foreign Ministry saying Moscow would be forced to use unspecified "military-technical methods" if a U.S.-Czech deal was ratified.

Putin, who handed over powers to Medvedev in May and is now his prime minister, warned in 2007 that Russia could aim missiles at European countries if the U.S. missile shield plans went ahead.

Russian generals have threatened to deploy tactical missiles in neighbouring Belarus and to resume production of short and medium-range nuclear missiles in response to Washington's missile plans.

But Medvedev, who met U.S. President George W.Bush on the sidelines of the G8 summit on Monday, said dialogue on the Missile Shield issue should not be stopped.

"We are not closed to further negotiations and we will continue these," he said.

"I think we are leaving a very strong relationship," U.S. Secretary of State Condolleeza Rice said in Bulgaria where she is now on a visit.

"But it's a complicated relationship because whenever you have a relationship this big, and with this many elements, there are going to be elements both confilct and cooperation, and both are evident in the relationship with Russia."