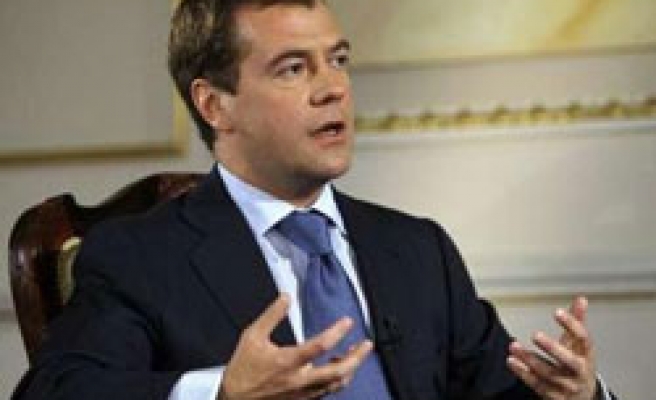 Russia wants to reduce the state's role in the economy and will curb government spending to combat rising inflation, President Dmitry Medvedev told Reuters in an interview.

Medvedev rejected any idea of a state energy giant buying into one of Russia's biggest foreign investments, oil firm TNK-BP, half owned by BP, and said Russia would not gamble its vast sovereign oil wealth on risky equity investments.

In a wide-ranging interview with Reuters at the Kremlin, Medvedev stressed the importance of international cooperation to solve global economic woes and repeated his proposal to make the rouble one of several regional reserve currencies, limiting the world's exposure to the dollar.

Analysts say that rising inflation, likely to hit 14 percent this year, is Russia's top economic problem. They believe the economy is growing too quickly, or overheating.

Noting that prices were rising more than twice as fast as an original government target of 5-6 percent a year, Medvedev said Russia did not have "supernatural overheating" but should act "toughly and clearly to limit these inflationary tendencies".

Asked what specific measures he would take, he mentioned the reduction of "excessive" government spending but said Russia "could not pursue interest rate policy in isolation" from international factors.

Russia manages the exchange rate of the rouble within a narrow band and is concerned that raising interest rates for the already strong national currency could encourage a flood of speculative capital into the country.

Medvedev first suggested giving the rouble a role as a reserve currency in February and he returned to the idea in the interview, saying it would help build a more robust global financial system.

"We think the rouble could potentially aspire to the role of a regional reserve currency," he said. "...I think this is an absolutely achievable task, it is interesting for Russia and for CIS governments."

Medvedev defended his predecessor in the Kremlin, Vladimir Putin, for bringing certain sectors of the economy such as energy and defence under tighter state control. This, he said, was important to "guarantee the strategic interests of the economy in the years to come".

The EU has raised concerns with Russia about the fate of TNK-BP, where BP's half share of the company is mired in a dispute with the Russian co-owners about strategy and ownership.

Analysts have suggested that the Kremlin wants a stake for a state energy firm such as Gazprom or Rosneft in TNK-BP but Medvedev, who previously headed Gazprom's board, rejected this.

"I didn't lead such conversations even as chairman of the board of directors," he said. "As far as I know, there are no proposals about the sale of the corresponding stakes to Gazprom or Rosneft so there is nothing to talk about."

"If there are offers, they will be considered. But in fact now there is no objective for state companies to acquire stakes from private companies."

Both the Russian shareholders and BP should settle their differences using the law and their own memoranda of understanding, he added.

"I can only call illegal attempts to use the state to resolve internal corporate disputes," Medvedev said. "Neither the Russian partners nor the British partners should resort to such policies."

Russia has built up a $162 billion windfall from unexpectedly high oil revenues and Medvedev said this money should be used first for domestic investment and to guarantee social programmes and pensions.

Some money could be invested abroad but only in "attractive, first-class assets, protected assets that will bring a guaranteed income, even in a conservative scenario".

His comments appeared to rule out the possibility that Russia might be more adventurous with its state wealth and copy Gulf and Asian states in taking stakes in Western banks and other riskier equities.

However, Medvedev called on Russian private sector businessmen to invest more of their surging profits abroad, saying that to do so would "strengthen economic stability and create mutual dependence".