Russia to start supplying MiG-29K fighters to India in May

Russia will start deliveries of MiG-29K Fulcrum-D carrier fighters to India for the Admiral Gorshkov aircraft carrier in May, the chief of the Indian Navy Staff said on Friday. 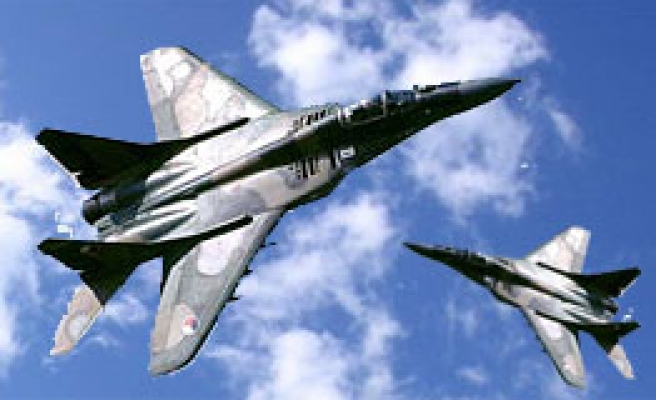 Admiral Suresh Mehta, who heads a group of Indian military officials that arrived in Russia on Thursday on a week-long visit, inspected on Friday the assembly of MiG-29K Fulcrum-D fighters at a plant near Moscow.

"We are nearing the [aircraft] delivery stage. The first MiG-29K fighter will be transferred in May this year," Mehta said, adding that the deliveries under contract had been "slightly delayed."

The contract, signed on January 20, 2004, stipulates the delivery of 12 single-seat MiG-29K and 4 two-seat MiG-29KUB in the period from 2007 to 2009, to be later deployed on the Admiral Gorshkov aircraft carrier, being refitted in Russia for the Indian Navy.

A MiG spokesman confirmed on Friday the timeframe for the deliveries of MiG fighters to the Indian Navy.

"The contract has been signed, and we are finishing the construction of the first batch of MiG-29K fighters and plan to start deliveries in May," the spokesman said.

Also on the agenda of the Indian delegation's visit are discussions on a controversial contract on modernization of the aircraft carrier.

After long-running delays and disputes, Russia and India agreed in February to raise refit costs for the aircraft carrier, berthed at the Sevmash shipyard in north Russia for the past 12 years.

Vijay Singh, the Indian defense secretary who inspected the Admiral Gorshkov in late February, said there would be "a substantial increase" in the "reworked estimate" for modernization work on the ship.

The minister did not mention any figures, but according to The Times of India, New Delhi is willing to pay another $600-800 million for the 44,570-ton aircraft carrier.

"It should be completed by mid-2010. After that, it will undergo 18 months of extensive sea trials by the Russian Navy to ensure all systems are working properly," he said.

The carrier, renamed the Vikramaditya, is to replace India's INS Viraat carrier, which although still operational is 50 years old.

India contracted the $1.5 billion Admiral Gorshkov for its navy in 2004. Moscow has since demanded an additional $1.2 billion, which New Delhi replied was "exorbitant."

The defense secretary said Vice-Admiral Dilip Deshpande, the controller of warship production and acquisition, would visit Russia to work out "the essentiality and reasonableness of costs" by the end of March.

After it is has been refitted, the Gorshkov is expected to be seaworthy for 30 years.

The contract to deliver the Admiral Gorshkov aircraft carrier to India, which state-run arms exporter Rosoboronexport signed with the Indian Navy, covers the modernization of the ship and equipping it with modern weaponry, including MiG-29K Fulcrum aircraft and Ka-27 Helix-A and Ka-31 Helix-B anti-submarine helicopters.