Russia would respond in same way if attacked

Merkel criticised Russia's actions against Georgia over its incursion into South Ossetia as disproportionate. 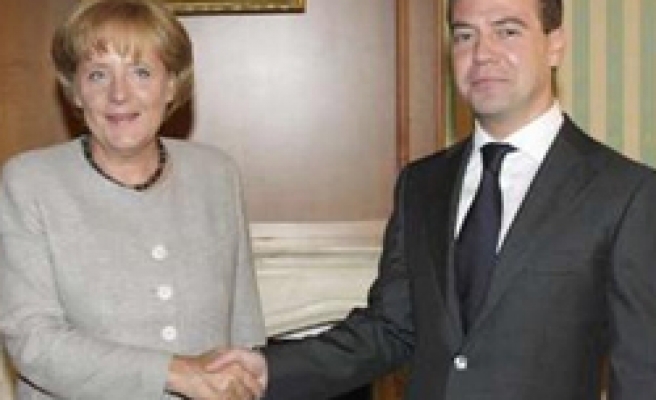 President Dmitry Medvedev said on Friday Russia would respond in a way similar to its actions in Georgia this month if its citizens or forces came under attack again.

Medvedev, speaking after talks with German Chancellor Angela Merkel, said a deal to deploy parts of a U.S. anti-missile system in Poland was directly aimed at Russia.

The Kremlin leader, addressing a news conference with Merkel, said no one should be in any doubt about Russia's response if its people came under attack.

"If someone continues to attack our citizens, our peacekeepers, we will of course respond in just the same way we have responded. There should be no doubt about this," he said.

Merkel criticised Russia's actions against Georgia over its incursion into South Ossetia as disproportionate.

"Some of Russia's actions were not proportionate," she said. "Russian troops should withdraw from central areas in Georgia."

She said a solution to the conflict had to respect Georgia's territorial integrity.

Medvedev said Georgia's two rebel regions of South Ossetia and Abkhazia were unlikely ever to want to be part of the Georgian state.

"Unfortunately, after what has happened it is unlikely that the Ossetians and the Abkhazians will be able to live in one state together with the Georgians," he said.

Russian peacekeepers, he added, would guarantee the "will of the people" of the two regions.

He said the U.S. missile pact with Poland bore out everything Russia had said about new systems in eastern Europe.

"This decision clearly demonstrates everything we have said recently," he said. "The deployment of new anti-missile forces has as its aim the Russian Federation."